WIEF meet and engagement timing was not accidental but planned by Najib and Rosmah... 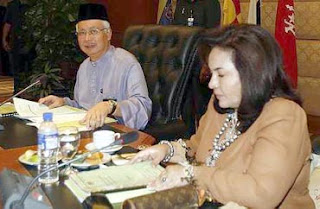 Officials in the service of Prime Minister Najib Abdul Razak and his wife Rosmah Mansor were told their daughter's pre-engagement visit to future in-laws in Kazakhstan must coincide with the World Islamic Economic Forum (WIEF) held in that country recently.

"In fact some of the officials were harassed to make it so," Kuala Selangor parliamentarian Dzulkefly Ahmad told Malaysiakini today. Dzulkefly said, based on reliable sources, the instructions were handed down by the premier and his wife.

"I am going to bring this matter and the information I have to Parliament," the PAS leader said. Parliament is slated to begin sitting on Monday.

Dzulkefly was referring to allegations that Najib misused an official visit for personal reasons when he used the Malaysian entourage to go to a pre-engagement function to his future in-laws in Kazakhstan.

The Ministry of Foreign Affairs' Department of Information and Public Diplomacy has denied the claim that Najib's Kazakhstan visit was for the wedding of his daughter Nooryana Najwa, 22. Nooryana is engaged to Daniyar Nazarbeyav, the son of a top Kazakhstan official. They met while Nooryana was a student at Georgetown University in Washington, DC.

Najib and Rosmah's pre-engagement visit with their daughter's future in-laws conveniently coincided with an official visit to Kazakhstan in conjunction with the WIEF recently. Dzulkefly is alleging that both events' timing was not accidental but planned by Najib and Rosmah.

In what he described as a blatant misuse of public funds, Dzulkefly also claimed that the entourage was bloated with extra guests and preparations to accommodate Najib's daughter's pre-engagement visit.

"When you are in a foreign land in an official entourage, your movements and schedule may mean extra costs. Did the groom's father pay, or Najib is using public funds? Its all muddled and is not transparent."

"The business of pre-engagement discussions is a messy one, and it caused a lot of trouble for the Malaysian WIEF delegation officials. I even hear from officials and reporters how they don't like it when Rosmah was throwing her weight around during the whole thing," he added.

Hello would you mind letting me know which webhost you're working with? I've loaded your blog in 3 completely different browsers and I must say this blog
loads a lot quicker then most. Can you recommend a good hosting provider
at a honest price? Cheers, I appreciate it!

Hi there! It appears as though we both have a interest
for the same thing. Your blog, "Blogger: tumpang sekole...?"
and mine are very similar. Have you ever considered writing a guest article for a related blog?

It is sure to help gain exposure to your website (my site recieves a lot of targeted traffic).

If you are interested, e-mail me at: toninewell@zoho.
com. Many thanks

Hey there! I've been following your website for a long time now and finally got the courage to go ahead and give you a shout out from Dallas Texas! Just wanted to tell you keep up the good job!

Feel free to surf to my web site: onyx
Here is my website : surpass

Hey there! I've been reading your weblog for some time now and finally got the courage to go ahead and give you a shout out from Houston Tx! Just wanted to mention keep up the fantastic work!

Hi! I know this is kind of off topic but
I was wondering which blog platform are you using for
this website? I'm getting tired of Wordpress because I've had
problems with hackers and I'm looking at options for another platform. I would be fantastic if you could point me in the direction of a good platform.

Feel free to visit my website :: folija
my webpage :: sticky21.overblog.com

Hey. I noticed your site title, "Blogger: tumpang sekole...?"
does not really reflect the content of your web-site.
When composing your site title, do you think it's most beneficial to write it for Search engine optimisation or for your viewers? This is one thing I've been struggling with mainly because I want good rankings but at the same time I
want the best quality for my site visitors.

Hey just wanted to give you a quick heads up. The text in your article seem to be running off the screen in Firefox.
I'm not sure if this is a formatting issue or something to do with internet browser compatibility but I thought I'd post to let you
know. The design and style look great though! Hope you get the issue resolved soon.
Many thanks

Feel free to surf to my web blog :: http://tree.celinuxforum.org/CelfPubWiki/Monterey_LG4230_Ready_To_Use_A_Tree_Stump...

We have gone ahead and added a hyperlink back to your website from one of my clients requesting
it. I have used your site URL: http://www.blogger.com/comment.
g?blogID=1624275106440922314&postID=6524596951196331539 and blog title:
Blogger: tumpang sekole...? to insure you get the proper anchor text.
If you woud like to check out where your link has been placed,
please contact me at: jeramybenjamin@emailcorner.net. Cheers

Hmm is anyone else having problems with the images on this blog loading?
I'm trying to determine if its a problem on my end or if it's the blog.
Any feed-back would be greatly appreciated.