Something rotten at the Duta courts... 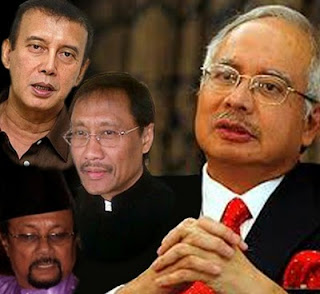 Shakespeare wrote in the play 'Hamlet' that "something is rotten in the state of Denmark". Court of Appeal judge NH Chan had also made similar remarks when he wrote the Ayer Molek Rubber Co Bhd vs Insas Bhd judgment in 1995, where he described the case he was presiding over as being about an injustice perpetrated by a court of law.

Can yesterday's conviction of the infamous 'Datuk T' trio be said a travesty of justice deserving the local version that goes "something is rotten in Duta courts" resulting in possibly another charge looming over Opposition Leader Anwar Ibrahim? Anwar had yesterday maintained the government's conspiracy in the matter saying how can one respect a government when its instruments are used politically.

Let's back-track a bit before returning to the conviction. The video was screened on March 21 at the posh and historical Carcosa Seri Negara Hotel by the Datuk T for several invited editors and journalists in a room booked under the name of former Malacca chief minister Abdul Rahim Thamby Chik, who is also Risda chairperson.

Rahim is part of the Datuk T trio that also comprised businessperson Shazryl Eskay Abdullah and former MP Shuib Lazim - all three later claimed responsibility for the event. The trio had called on Anwar to resign. This led to Anwar issuing a statement on the same day, March 21, denying that he was the one in the video and lodged a police report the next day.

As a result, trio was called in and it was during this time Eskay said he had handed the only copy of the sex tape to the police. However, copies of the clip made their way online just before the Sarawak state elections, only to resurface last month, this time in full. It also made its way to the homes of village headmen and politicians via post.

After a period of silence, Eskay took a religious oath at a Sentul mosque - complete with bullet-proof vest - to vow that Anwar was the man in the video. He repeated himself yesterday when the facts of the case were being read out in court, telling the court that the man in the video resembling Anwar, was indeed the politician.

Then the trio pleaded guilty to be fined a total of RM5,500.

When Eskay told reporters on Wednesday that he would be charged on Friday, several parliament reporters claimed that they spotted Rahim apparently seeing Prime Minister Najib Abdul Razak in the august House. Eskay initially said he would be charged, but later confirmed it would include all three. While Najib denied the meeting took place, Anwar maintains it did indeed happen, suggesting that it would probably lead to the charge being reduced, thus adding muscle to his assertion of a conspiracy.

The trio of Eskay, Rahim and Shuib were the main actors along with DPPs Kamaludin Md Said and Mohd Hanafiah Zakaria and respected lawyer Muhammad Shafee Abdullah, along with two other lawyers.

Another bombshell dropped before the Datuk T trio were charged when Umno-owned Utusan Malaysia ran a story yesterday quoting Eskay as saying he was prepared for any outcome with the article aptly titled 'Kami sedia apa saja hukuman' (We are prepared to face any punishment). So Utusan had a scoop probably because they knew the high possibility of all three preparing to plead guilty and Eskay maintained there was nothing wrong with making the video public.

The same story stated that the trio would be charged under Section 5 of the Film Censorship Act, for circulating, exhibiting, distributing, and displaying an obscene film, which is punishable by a fine of not less than RM10,000 and not more than RM50,000 or imprisonment for a term not exceeding five years or both. The Umno-owned daily got that charge wrong when prosecution filed a lesser charge against Datuk T. Anwar pounced on this to back his political conspiracy accusation.

Before the arrival of the accused, reporters somehow knew in advance that the case would be heard at magistrate's court three and rushed up there. Normally, a case would have to be registered first, only then will the courtroom be known. That is the normal procedure any lawyer will tell you to ensure that there is no fixing of judge or magistrate. It could not be determined if the case had been registered first when the counter opened at 8am and Eskay and co was told to arrive at that time, but they instead presented themselves sometime around 9.15am in court.

According to reporters covering the trial, two widescreen televisions were already placed in court as a possible prelude to the video being screened. Some lawyers who were not watching the case but were in the huge court complex were heard murmuring that the protests outside the court in support of Datuk T and the charging were merely a sideshow - a show which may have entranced and held the whole nation captive as the three-and-a-half hour proceedings rolled on.

Another point of oddity was when the charge was read out under section 292 of the Penal Code, all three had asked for a break to consult their counsel. When the case was recalled, they pleaded guilty and the facts of case had already been conveniently prepared.

Normal proceedings in such cases in a magistrate's court is that when a person pleads guilty, the prosecutors would seek more time - usually a few hours or in the afternoon and sometimes the next day to prepare the statement.

However, in this case, after a 45-minute interval the charge was read again and all three entered their plea with the statement of facts already prepared. The five-page fact sheet appeared to have been carefully crafted to implicate Anwar in the video as his name was mentioned at least five times right from the first paragraph.

Then came the real jolt when Shafee and not the prosecution told the magistrate that according to case laws, many such cases had been thrown out on appeal because the obscene material had not been screened.

He then applied for the 20-minute sex-clip to be shown in court. The prosecution and other defence counsel raised no objections. The tape then appeared on the two big screens, which had been conveniently been placed there earlier. Then Shafee began his lengthy submission in mitigation representing the third defendant, Rahim. He stated the revelation of video was made in defence of the public good and his client's role was merely booking the hotel room. The other counsel then delivered their submissions. 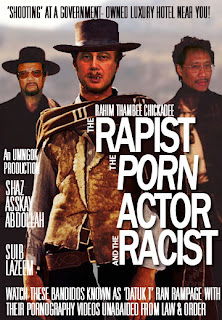 Putting together all the incidents what is a sane person to assume, that they were merely coincidences or a meticulously crafted consipiracy as claimed by Anwar? This despite the foreign findings that the person performing the sex act resembled the opposition leader.

The tape was shot before the crucial Sarawak election and the other point is that Anwar who is facing an on-going sodomy trial at that time was successful in blocking at the High Court, the admission of three crucial items retrieved in the police lock-up - the toothbrush, the mineral water bottle and white towel.

The other point not mentioned earlier is that Eskay himself was embroiled in a legal battle involving a RM20 million suit he filed against Merong Mahawangsa Sdn Bhd and one of its directors, over the construction of the Johor Baru crooked bridge. The High Court ruled against him.

Is it strange that the sex-tape investigations took three months as a retired senior police officer said that in such cases the person caught would be charged within a week. The clip was also widely distributed after Eskay conveniently handed the only copy to the police. Were hidden hands at work when what was reportedly a charge under the Film Censorship Act as was highlighted in Utusan Malaysia was reduced to a lesser offence under the Penal Code?

Is it a coincidence that big screen televisions were placed in court before the start of proceedings and the facts of case conveniently prepared.
Anwar told reporters he had raised the issue of political conspiracy with Najib, Rahim, Eskay, Shuib, attorney-general Abdul Gani Patail and Shafee's involvement.

As the facts presents themselves, the readers can decide whether something rotten really happened at the Duta Court yesterday.-Hafiz Yatim

The Judiciary has made a mockery of the legal system in the country. The court cannot allow such a statement that was not challenged by Anwar.There is clear cut evidence of CONSPIRACY involving the Judiciary, Polis and the AG.....