Khir Toyo smiles as the prosecution closed its case... 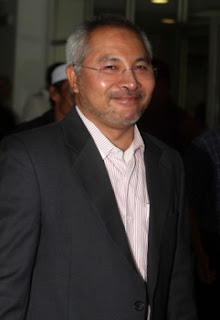 Former Selangor chief minister Khir Toyo can afford to smile, the prosecution has closed its case and now the ball is in his court. He has been able to show that, indeed, he had bought the house from Ditamas at market value when he paid RM3.5 million for it.

The evaluation from HSBC bank puts the house at RM3.5 million, at the time Khir Toyo applied for the loan. Which means Ditamas Sdn Bhd - who bought the house at a whooping RM6 million - actually paid more and should be scolded for making such a bad purchase at double what the house is really worth.

And this was what the trial was really about.

Never charged for corruption at all

A trial to accertain if Khir Toyo knowingly purchased a house for a price below what it was really worth. It was never a corruption case. Khir Toyo was conveniently never charged under the MACC Act by the Attorney General but instead under Section 165 of the Penal Code.

Especially, if one was to read the two together - MACC Act and Section 165 of the Penal Code - one can clearly see that the two are totally different from each other.

This trial was established the fact that Khir Toyo purchased the property at the correct price. Not once during the whole trial, was Khir Toyo asked to give an account as to how he managed to obtained the money involved in such a large purchase.

What did Khir Toyo put up as collateral in order to secure a RM3.5 million loan from HSBC? And HSBC being an overseas bank would have some strict conditions for approving a loan of such magnitude.

Where did Khir Toyo get an additional RM6 million to renovate the house with a Balinese style theme? And if he is able to fork out RM6 million for renovating a house, then surely he must have more where that came from.

The trial from the very beginning was painted as a corruption case with the MACC involved and all just in time for a major election - the Sarawak elections. Giving the BN government a shine in their efforts to curb corruption and showcasing their color-blindness in enforcing law and order without fear nor favor.

Yet the moment it reached the Attorney General’s desk, the whole corruption case was turned into a lesser charge of un-appropriate purchasing. A discount on the sentence was also thrown in, two years as opposed to the twenty he would have received if found guilty under the MACC Act. This is the travesty of the judiciary that has eaten it’s way into the Malaysian court system. Favor is shown towards those who are clearly aligned to the ruling government.

High-handed methods are used against Teoh Beng Hock when the MACC brought him in over a charge of corruption involving RM5,000. It cost Teoh his life and yet Khir Toyo can afford to smile for a sum of RM3.5 million.

In a trial full of show, Khir Toyo will never need to tell the public how a civil servant can amass millions in personal wealth. He was merely called upon to prove the paper-work was in order when he bought his house.

As fo Ditamas director, Shamsuddin Haryoni turning prosecution witness, that must have been the high-point in this Selangor UMNO-orchestrated drama. And no prizes for guessing who is the head of Selangor UMNO now!
source:Malaysia Chronicle

From the very beginning I've already said that it's another soap opera. And it really is.