Why Najib and Rosmah won't testify and who is stopping them 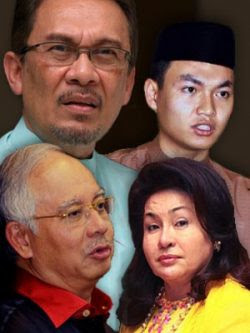 There are many Malaysians who say there is no such thing as a fair trial, if politically, you stand with the team opposing the government. And if your name happens to be Anwar Ibrahim, you might as well brace yourself for a conviction and the harshest sentence.

In Malaysia, these critics add, a fair trial for the oppositon just would not work because it goes totally against the workings of a totalitarian government such as the one Prime Minister Najib Razak heads.

In other words, there is no such thing as a fair trial because the Barisan Nasional government headed by UMNO has never played fair in anything - ever.

It should not be any surprise to Malaysians when Opposition Leader Anwar Ibrahim’s third attempt to dismiss the judge was turned down. The judiciary has firmly been working against Anwar since Sodomy 1 in 1998 and now in Sodomy 2.

The charge made against Anwar Ibrahim is under Section 377B of the Malaysian Penal Code. A rather odd and mind-boggling section to begin with. Section 377 defines oral sex and any forms of sexual activity other than what is deemed natural both illegal and punishable by law.

Note the word “voluntarily” - for the charge to be proven exactly, it must be proven that the accuser Mohd Saiful Bukhari Azlan voluntarily allowed the act to be commit, which makes him also liable for charge under the same statute.

Will Najib and Rosmah blurt out the truth?

As such, if the accuser wants to strengthen his case, then it would also be beneficial for him to call the various persons who heard his tale namely Najib Razak and Rosmah Mansor. But in keeping with the un-fair nature of this case, the tag team of Prime Minister and wife will never see the light of day at the witness stands.

"Our hands are tied in trying to provide Anwar with a proper defence as the prosecution has refused to provide us with all the witnesses that they promised to produce. How can Anwar get a fair trial when we can't even interview the prosecution's witnesses in order to decide who to call?" Sankara Nair, Anwar's counsel, told reporters at the court house on Monday.l

What is there to hide by shielding Najib Razak and Rosmah Mansor from taking the stand?

For by Saiful’s own admission, he went to see Najib before making the police report and in typical flip-flop nature, Najib denied meeting Saiful and then later, after photos of Saiful and Najib’s personal assistant made its rounds on the Internet, Najib admitted to meeting and advising Saiful to make a police report.

The only logical grounds for keeping Najib and Rosmah out of the picture lies in the notion that the two may be caught lying by the defense team of Anwar Ibrahim.

Then there is the issue of why Saiful himself was not charged along with Anwar Ibrahim. The nature of Section 377B implies that both parties are to be charged and dutifully punished, yet Saiful is free as a bird. This defies logic, but then to maintain the degree of un-fairness in Malaysia, logic has to be thrown out of the window.

How else for the truth to be hidden under layers of lies cemented together by a sick desire to kill off a political adversary deeed to be a threat to the current structure of corruption that we sadly see in Malaysian governance.

The truth of the matter is, Sodomy 2 is a lie.

For if Section 377B is to be enforced in all fairness, a majority of Malaysians whether men or women would be detained and imprisoned for performing “carnal intercourse”.

Anwar Ibrahim will never get a fair trial because the very system itself was never fair in the first place.