A staggering 99 percent of slightly more than one million respondents in a poll by The Star Online have indicated support for the Bersih 2.0 rally on July 9. The actual number of respondents cannot be confirmed as the poll was taken down about noon today.

According to a screen capture taken by a Facebook user, the number of respondents had hit 1.3 million at 12.25pm from 527,330 recorded at 6.11am today, according to a Google Cache snapshot of the website.

The other option - 'It should be cancelled' - was selected by 14,222 respondents.

The poll was discussed with great interest by users of the Curi-curi Wang Malaysia Facebook page, which was set up recently in protest against Tourism Malaysia for spending RM1.8 million on a social media campaign.

However, jubilance turned to scorn when they realised that the poll had been taken down. 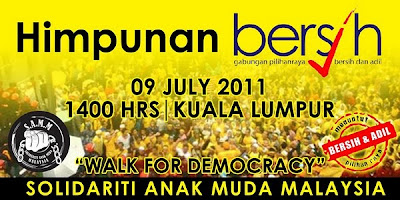 The Bersih 2.0 rally seeks to create awareness for meaningful reform to the electoral system and will petition for intervention by the Agong. Government officials have claimed that the electoral system is not flawed and accused opposition parties of masquerading in the guise of a NGO coalition to stoke public anger.

The Election Commission (EC) claimed that it has been made a scapegoat in the matter, but offered a dialogue with Bersih 2.0 if it calls off the rally. However, Bersih 2.0 yesterday maintained that it will proceed with the rally as previous meetings with the EC had come to naught.

Bersih 2.0 is also challenging the EC to reveal the list of recommendations submitted to the federal government to improve the electoral system.

At this time it looks like Expression Engine is the preferred blogging platform
out there right now. (from what I've read) Is that what you're using on your blog?

Feel free to surf to my web blog weeknight

Hiya! I know this is kinda off topic however I'd figured I'd ask.

Would you be interested in trading links or maybe guest authoring a blog
post or vice-versa? My site goes over a lot of the same topics as yours and I believe we could greatly
benefit from each other. If you're interested feel free to shoot me an e-mail. I look forward to hearing from you! Terrific blog by the way!

Currently it sounds like BlogEngine is the best blogging platform available right now.
(from what I've read) Is that what you are using on your blog?

Feel free to surf to my homepage removal tools

Hi, i read your blog from time to time and i own a similar one and i was just curious if you get a lot of spam remarks?

If so how do you prevent it, any plugin or anything you
can recommend? I get so much lately it's driving me mad so any support is very much appreciated.

Whats up this is kinda of off topic but I was wondering if blogs use WYSIWYG editors
or if you have to manually code with HTML. I'm starting a blog soon but have no coding knowledge so I wanted to get advice from someone with experience. Any help would be greatly appreciated!

Hey administrator, I just wanted to give you a quick heads up that your Domain name: http://www.
blogger.com/comment.g?blogID=1624275106440922314&postID=7686914940705028414 is being flagged as
a potentially harmful web site in my internet browser chrome.
I'd highly recommend having somebody look into it. You can certainly lose a lot of website visitors due to this issue. Very best of Luck.

Hi! I am about to begin my own blog and was wondering
if you know where the best place to buy a website url is?

I've loaded your website in Several different internet browsers and I must say your blog loads a lot faster then most. Would you mind emailing me the company name of your website hosting company? My personal e-mail is: brycegill@hotmail.de. I will even sign up through your own affiliate link if you would like. Thankyou

Hmm is anyone else encountering problems with the images on
this blog loading? I'm trying to determine if its a problem on my end or if it's
the blog. Any feedback would be greatly appreciated.