"Khir told me to buy it," claims Shamsuddin Hayroni.... 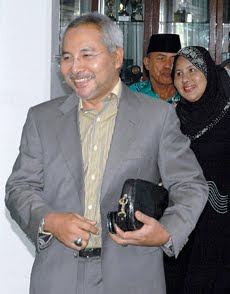 A businessman testified today that he had "no choice" but to give former mentri besar Dr Mohamad Khir Toyo a hefty discount and sold him property worth RM6.5 million property for RM3.5 million four years ago. He also said that he bought the property as Mohamad Khir’s told him to.

Ditamas Sdn Bhd director Datuk Shamsuddin Hayroni told the High Court he could not refuse Mohamad Khir’s proposal to buy the two-plot land and a bungalow for the price.

He said this was because he had development projects in Selangor and was afraid that his refusal to then mentri besar could damage his business.

"I did not agree. I told him (Mohamad Khir) it was too low. I wanted to sell it for between RM5 million and RM5.5 million after giving him some discount," he said in reply to questions from DPP Abdul Wahab Mohamed.

"After discussing with my wife, I had to agree to Mohamad Khir’s price because he was the MB. I was worried about my status as a businessman and that my projects in Selangor would be affected."

Shamsuddin, who was acquitted of a charge of abetting Mohamad Khir last week and turned prosecution witness, also revealed that it was Mohamad Khir, who had asked him to buy the property.

"Mohamad Khir had actually asked my friend Datuk Sumadi Ismail to buy the bungalow but when Sumadi said he could not as he had many commitments, Mohamad Khir asked me to buy it.

"It was the MB, who was asking me to buy. I saw that he was interested in property and thought he would buy it from me. So I just proceeded. I bought it under Ditamas because it would be easier to arrange for loan," he said. He bought the property at No. 8 and 10, Jalan Suasa 7/1L, Section 7 from property developer Saiful Aznir Shahabudin for RM6.5 million in December 2004.

Mohamad Khir, 45, who is Sungai Panjang assemblyman, and was mentri besar for almost eight years, is accused of committing graft in the land deal. 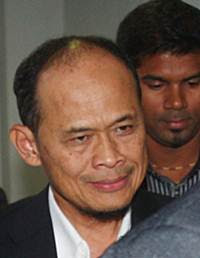 Shamsuddin(left), who was initially charged jointly with Mohamad Khir under Section 165 of the Penal Code and separately for abetting with the former MB, was acquitted on June 6.

He had been jittery in the witness stand on Wednesday, causing the trial to be postponed.

Defense counsel M. Athimulan has informed the court that the defence will tomorrow apply for documents pertaining to Shamsuddin’s statements to the Malaysian Anti-Corruption Commission with a view to challenging his credibility through impeachment.

Earlier, freelance landscaper Nasir Ismail, 55, who on Thursday testified that he was paid RM6 million in cash installments to landscape the bungalow gardens to Balinese-concept, was accused of fabrication by Athimulan.

"Since you keep saying you have no records of the transactions and dealings made between you and Mohamad Khir, I put it to you that you met Mohamad Khir in May 2007 and not March 2006, which you said on Thursday.

"The total amount you received was only RM1.5 million (and not RM6 million)," he told Nasir, who disagreed.

Nasir told the court it was Mohamad Khir who had said there was no need for receipts for their transactions.

"He (Mohamad Khir) said I’ll pay in cash … no need receipts," he said. Athimulan also accused Nasir of lying to the court since he could as there was no documentation to records and details pertaining to the work completed.

Submitting an agreement for RM1.5 million, signed by Nasir and Mohamad Khir in May 2007, Athimulan insisted that this was the real contract between the two and that renovation works only started in 2007.

However, Nasir continued to disagree and maintained his testimony that renovation had started in 2006 and more than RM6 million was paid for the work. Dismissing Athimulan’s allegation, he told the court the agreement was "just for formality".

My spouse and I stumbled over here by a
different web page and thought I may as well check things out.
I like what I see so now i'm following you. Look forward to looking over your web page yet again.

Hi there! I know this is kinda off topic however , I'd figured I'd ask.
Would you be interested in trading links or maybe guest authoring
a blog post or vice-versa? My blog addresses a lot of the same
subjects as yours and I feel we could greatly benefit from each other.
If you might be interested feel free to shoot me an e-mail.
I look forward to hearing from you! Terrific blog by the way!


Feel free to visit my page series
Stop by my site ... concrete driveway

Feel free to surf to my weblog - ferment
Visit my blog : plausible

Good day! Would you mind if I share your
blog with my twitter group? There's a lot of folks that I think would really enjoy your content. Please let me know. Thanks

I absolutely love your blog and find a lot of your post's to be exactly I'm looking for.
Do you offer guest writers to write content for you personally?
I wouldn't mind composing a post or elaborating on a few of the subjects you write concerning here. Again, awesome web site!

Here is my web blog ... superfluity
Feel free to visit my web-site : fusillade

Yesterday, while I was at work, my cousin stole my iPad and tested to see if it
can survive a thirty foot drop, just so she can be a youtube sensation.
My apple ipad is now broken and she has 83 views.
I know this is completely off topic but I had to share it with someone!

Please let me know if you're looking for a article writer for your blog. You have some really good posts and I feel I would be a good asset. If you ever want to take some of the load off, I'd love to write
some material for your blog in exchange for a link back to mine.
Please send me an email if interested. Regards!

What do you think? Thank you

I was wondering if you ever considered changing the page layout of your blog?
Its very well written; I love what youve got to say.
But maybe you could a little more in the way of content so people could connect with it better.
Youve got an awful lot of text for only having 1 or 2 pictures.
Maybe you could space it out better?

Feel free to surf to my web blog: weeknight

Hey! I'm at work browsing your blog from my new apple iphone! Just wanted to say I love reading your blog and look forward to all your posts! Carry on the outstanding work!

Feel free to surf to my site ... instructions

This design is incredible! You definitely know
how to keep a reader amused. Between your wit and your videos, I was almost moved to start my own
blog (well, almost...HaHa!) Great job. I really enjoyed
what you had to say, and more than that, how you presented it.
Too cool!

Hi there! I know this is kinda off topic but I was wondering if you
knew where I could get a captcha plugin for my comment form?
I'm using the same blog platform as yours and I'm having problems
finding one? Thanks a lot!

Check out my web page - stump

I have gone ahead and included a hyperlink back to your internet site from one of my clients requesting it.
We have used your website URL: http://www.blogger.
com/comment.g?blogID=1624275106440922314&postID=3368503062112139506 and
blog title: Blogger: tumpang sekole...? to make
certain you get the proper anchor text. If you woud like to see where your
hyperlink has been placed, please e mail me at: israel-cotton@gmail.

I was curious if you ever considered changing the page layout of your website?
Its very well written; I love what youve got to say.
But maybe you could a little more in the way of content so people
could connect with it better. Youve got an awful lot
of text for only having 1 or two pictures. Maybe you could space it out better?

Does your blog have a contact page? I'm having problems locating it but, I'd like
to send you an e-mail. I've got some recommendations for your blog you might be interested in hearing. Either way, great blog and I look forward to seeing it expand over time.

Thanks for a marvelous posting! I genuinely enjoyed reading it,
you may be a great author.I will make sure to bookmark your blog and will come back very soon.
I want to encourage that you continue your great posts, have a nice day!

Hello are using Wordpress for your site platform?

I'm new to the blog world but I'm trying to get started
and set up my own. Do you require any html coding knowledge to make your
own blog? Any help would be really appreciated!

Hello are using Wordpress for your site platform? I'm new to the blog world but I'm trying to get started and set up my own.

Do you require any html coding knowledge to make your own
blog? Any help would be really appreciated!