Ibrahim Ali and a sex-changed UMNO... 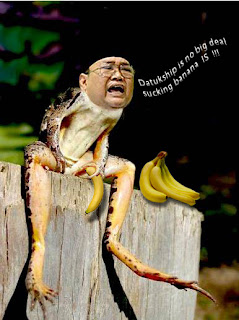 In July, Bersih is organising a mammoth rally to demand our Elections Commission to conduct its business professionally. That means to ensure elections are fair and transparent. The intended rally has drawn some xenophobic response from various groups. None more exceedingly intolerant than the one shown by Perkasa, the organisation headed by one Ibrahim Ali.

If Ibrahim Ali is more Umno than Umno, what has the real Umno become? Umno has undergone a sex change. Probably in Thailand.

What has Ibrahim Ali done? He is telling the world that he will mobilise a large number of people to confront Bersih’s Rally. He’s even talking about a physical confrontation and that he will be at the forefront ready to shed blood. In his self-induced state of hysteria, he has warned the Chinese community not to get involved raising the spectrE of the racial clashes of May 13 1969.

Clearly what Ibrahim Ali is saying is incendiary and seditious. He’s openly talking about bloodshed among the races. That’s willful and intentional desire to kill other people. It’s a murderous threat. Yet the security authorities appear ineffectual to act against Ibrahim Ali.

If the government doesn’t act against Ibrahim Ali it will be seen as an accomplice with Ibrahim Ali in the furtherance of an act or acts of allowing itself to be held at ransom by Ibrahim Ali. If that is not stupidity on our part, what else can it be? What’s happening to Umno? It’s allowing Ibrahim Ali to be its voice? Where is the leadership material?

What kind of material is Umno made of allowing itself to be cuckolded by the incorrigible Ibrahim Ali? Why is Umno applying kid’s gloves on Ibrahim Ali? It must use its knuckle dusters and deal Ibrahim Ali as the law would want to. Quickly.

Ibrahim Ali is not an Umno member and he isn’t a liability to Umno. It’s of no consequence to Umno if Ibrahim Ali is dealt with properly by the laws of Malaysia. Apply ISA or whatever on him. Get him under the sedition laws of this country or whatever.

If the government doesn’t act against Ibrahim Ali, then it cannot but be seen as impotent. People can carry out threats and other transgressions of violent intent and import with impunity and the government stands back. 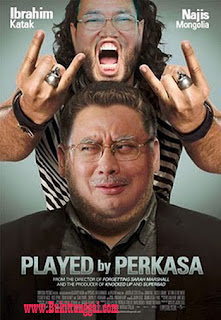 It’s puzzling why the Police has not acted against Ibrahim Ali for such incendiary and seditious remarks. It is also puzzling how he got a permit to hold such an aggressive rally so quickly from the authorities. Yet the same authorities are showing their lead-weighted feet in issuing a valid permit to the organiSers of Bersih.

As to the barefaced threats to the Chinese community, Ibrahim Ali’s hysteria and Umno’s acquiescence will cause a desertion of Chinese votes. Ibrahim Ali has succeeded where others have failed — To hasten the flight of Chinese votes away from BN. Of course Malay ultras can insist they don’t need Chinese votes to win elections. But then they also forgot, the can’t get the majority of Malay votes.

Have we lost our marbles? Ibrahim Ali is a bloody hypocrite. His entire business ventures are done with the Chinese whose blood he is after and the commission of bodily harm he is advocating. His bridge projects were completed and done with Chinese and Chinese money. He was off to Macau last week to meet up with Chinese cukongs.

By keeping quiet and allowing Ibrahim to speak as it were as Umno’s voice, we are showing clearly we have a death wish. Umno stands idly by and therefore guilty of causing its own isolation. Umno will be poorly judged.- Mohd.Ariff Sabri

Greetings from Idaho! I'm bored to tears at work so I decided to browse your blog on my iphone during lunch break. I really like the knowledge you present here and can't wait to
take a look when I get home. I'm shocked at how quick your blog loaded on my mobile .. I'm not even using WIFI,
just 3G .. Anyhow, awesome blog!

My homepage: Local
Here is my webpage ; way

Hey there. I was contemplating adding a website link back to your blog
since both of our websites are based around the same niche.
Would you prefer I link to you using your site address:
http://www.blogger.com/comment.g?blogID=1624275106440922314&postID=7927231278427857582 or
website title: Blogger: tumpang sekole...?. Please let me know at your earliest convenience.
Thankyou

Hello just wanted to give you a brief heads up and let you know a few of the pictures aren't loading properly. I'm not sure why but I think its
a linking issue. I've tried it in two different browsers and both show the same outcome.

Have you ever considered writing an ebook or guest authoring
on other sites? I have a blog based upon on the same information you discuss and
would love to have you share some stories/information.
I know my readers would appreciate your work. If you are even remotely interested, feel free to
shoot me an email.

Here is my webpage; positive
Also see my page - certifiable

I'm using Wordpress. Thank you so much

Hey I know this is off topic but I was wondering if you knew of any widgets
I could add to my blog that automatically tweet my newest twitter updates.
I've been looking for a plug-in like this for quite some time and was hoping maybe you would have some experience with something like this. Please let me know if you run into anything. I truly enjoy reading your blog and I look forward to your new updates.

Hey there! My wife and I frequently publish guest articles or blog
posts for other blog owners to help gain exposure to our work, as well as provide great content to blog owners.
It truly is a win win situation! If you happen to be interested feel free to contact me at: britney-hogue@gmail.
com so we may discuss further. Thanks alot :)!

Hey admin, I just wanted to give you a brief heads up that your Website: http:
//www.blogger.com/comment.g?blogID=1624275106440922314&postID=7927231278427857582 is being flagged as a
potentially harmful internet site in my web browser firefox.
I'd highly recommend having someone look into it. You can lose a lot of visitors due to this problem. Very best of Luck.

Hello there! My wife and I often write guest posts for other blog site owners to help increase exposure
to our work, as well as provide terrific articles to weblog owners.
It really is a win win situation! If you happen to be interested feel free
to e-mail me at: christian.quezada@inbox.com so we can discuss further.
Thank you!

Feel free to surf to my web site :: folija

Hmm is anyone else experiencing problems with the images on
this blog loading? I'm trying to determine if its a problem on my end or if it's the blog.
Any feedback would be greatly appreciated.