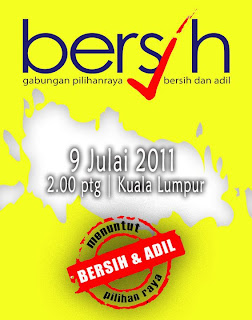 "We will take the necessary precautions, which include making preventive arrests before and during the rally," Khalid told reporters at the Cheras police academy today. He said that no permits have been issued to the organisers or groups planning counter-protests.

"We have received a total of 418 police reports from business operators, travel agencies, and individuals protesting the rally which is supposed to be held," he said.

Bersih 2.0 is organising a mass rally to demand electoral reforms and will submit a petition to the Agong to seek his attention on the matter.

A similar rally organised by its predecessor Bersih was held in November 2007 to pressure the government into mandating the use of indelible ink to mark those who had cast their ballots to prevent them from voting twice. Other demands at the time included a thorough update of the electoral roll, eliminating the postal voting system and providing opposition parties access to the mainstream media. 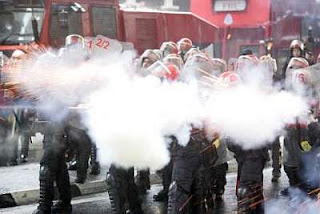 Bersih 2.0's leader Ambiga Sreenevasan argued that none of these recommendations have been implemented and the rally was a "last resort" after various attempts to engage the authorities failed.

In addition to the 2007 demands, Bersih 2.0 is seeking automatic voter registration for those aged 21, a postal voting system for out-of-town voters, a minimum campaign period of 21 days, independence of enforcement bodies on election offences and stamping electoral graft.

PAS, meanwhile, has urged the police to take action against Perkasa and other groups who are planning a counter-rally. In a statement today, PAS information chief Tuan Ibrahim Tuan Man said Perkasa has been making inflammatory statements about the Bersih 2.0 rally with absolute impunity.

“The (lack of) action by the police is as though the country has no laws and an NGO is allowed to flout the laws and issue various provocative statements freely,” he said.

Justifying PAS's participation in the rally, Tuan Ibrahim said discussions would soon be sought with the Election Commission to prove that the party was not demonstrating for the sake of it.

“We want to show the government how serious is the people's anger towards an unjust system by marching,” he said.

Meanwhile, the steering committee of Bersih 2.0 extended an olive branch and said that they intend to work with the police on the day of the rally.

“Bersih 2.0 believes that with cooperation from all parties including the authorities, the rally can proceed quickly and without disturbance as proven during the 'Walk And Rawk for Change' in conjunction with International Women's Day in March and the 'Stop Lynas Solidarity Walk' on May 20.

“With respect to the many police reports filed against the rally, we wish to assure the public that this rally is intended to be a peaceful, responsible gathering and we will be taking all the necessary steps to ensure that it proceeds in this manner,” said the committee in a statement today.

Howdy! This is the third time visiting now and I really just wanted to say I truley get pleasure from reading your site.
I have decided to bookmark it at delicious.com with your title:
Blogger: tumpang sekole...? and your URL: http://www.blogger.
com/comment.g?blogID=1624275106440922314&postID=7823055180438724396.
I hope this is fine with you, I'm making an attempt to give your fantastic blog a bit more exposure. Be back shortly.

Take a look at my homepage: alarm
Look into my website ; private

Hello are using Wordpress for your blog platform?

I'm new to the blog world but I'm trying to get started and set up my own.
Do you require any html coding expertise to make your own blog?

Any help would be greatly appreciated!

Take a look at my page ... bloomers
Here is my web page harlequinade

Good day! I could have sworn I've been to this site before but after browsing through some of the post I realized it's
new to me. Nonetheless, I'm definitely happy I found it and I'll
be book-marking and checking back frequently!

Hi there! It looks as though we both have a interest for the same thing.
Your blog, "Blogger: tumpang sekole...?" and mine are very similar.
Have you ever considered authoring a guest article for a related website?

It will definitely help gain publicity to your website (my website recieves a lot of targeted traffic).
If you're interested, email me at: jeromerubin@gmx.de. Appreciate it

I'll aslo be certain to give you the appropriate anchor text link using your blog title: Blogger: tumpang sekole...?. Be sure to let me know if this is ok with you. Thanks

I was wondering if you ever thought of changing the layout of your site?
Its very well written; I love what youve got to say.

But maybe you could a little more in the way of content so people could
connect with it better. Youve got an awful lot of text for only having one or two
images. Maybe you could space it out better?

Hi there! I could have sworn I've been to this blog before but after checking through some of the post I realized it's new to me.
Anyhow, I'm definitely delighted I found it and I'll be bookmarking and checking
back often!

Woah! I'm really digging the template/theme of this blog. It's simple, yet effective.
A lot of times it's challenging to get that "perfect balance" between usability and visual appearance. I must say you have done a fantastic job with this. Also, the blog loads very fast for me on Safari. Exceptional Blog!

Sweet blog! I found it while searching on Yahoo News. Do you have any suggestions on how to get listed in Yahoo News?
I've been trying for a while but I never seem to get there! Cheers

Hi there would you mind sharing which blog platform you're working with? I'm going to start my own blog in the near future
but I'm having a tough time deciding between BlogEngine/Wordpress/B2evolution and Drupal. The reason I ask is because your design seems different then most blogs and I'm looking
for something completely unique.
P.S Apologies for being off-topic but I had to ask!

Feel free to surf to my blog post; originalno

Hi! My spouse and I often publish guest articles for other
web site owners to help increase exposure to our
work, as well as provide fantastic content to weblog owners.
It truly is a win win situation! If you happen to be interested feel free to contact me at:
franchescapotter@googlemail.com so we can talk further.
Thanks alot :)!

my weblog: recovery
my site > comp

I'd highly suggest having somebody look into it. You can lose a lot of visitors due to this problem. Best of Luck.

Hi! It appears as though we both have a interest for the
same thing. Your blog, "Blogger: tumpang sekole...?" and mine are very similar.
Have you ever thought of authoring a guest post for a similar website?
It will surely help gain exposure to your website (my site recieves
a lot of visitors). If you're interested, email me at: ieshacorona@gmail.com. Many thanks

Here is my weblog; computer