Bersih must march on undaunted.... 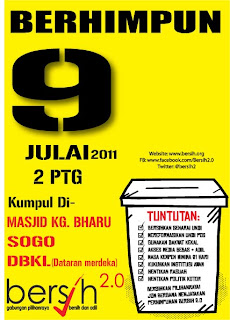 A peaceful rally calling for electoral reform would have gone down as almost a non-event in any democracy, but not in Malaysia. Here, the news of such an impending rally has virtually caused the incumbent ruling power to go into a state of panic.

Ever since the Coalition for Clean and Fair Elections - a civil society movement known as Bersih - called for a peaceful rally on July 9 to press for electoral reform, hardly a day goes by without some bigwigs pressing the panic button, as if calamities will befall the nation if such a rally were to take place.

The home minister has warned of dire consequences to political and economic stability, Umno's ultra-racist wing Perkasa has called for a rally of its own to crush the Bersih rally, the police chief has warned Bersih of preventive arrest, and hundreds of reports have been lodged with the police by Umno and its associated bodies to oppose such a rally.

(Bersih had earlier extended invitation to all political parties including ruling BN and opposition alliance Pakatan Rakyat, as well as NGOs and activists to participate in this mass movement to restore integrity to the Malaysian electoral system, which has been hopelessly corrupted to favour the incumbent ruling coalition. While Pakatan component parties have accepted the invitation, BN has not.)

Muhyiddin debunked Bersih's agitation for reform by citing the opposition's impressive electoral gain in the 2008 general election as proof of the electoral system's fairness.

He asked: “If it is not free and fair, how could they make such electoral gains? If they win they keep quiet, and if they lose, they claim unfairness. I think their motive is to have a shortcut to Putrajaya.”

Equating the opposition's electoral win as proof of the system's fairness has become BN's standard answer to fence off rising condemnation of BN's massive abuses that have gone from bad to worse.

But such an argument is as illogical as it is laughable. Whether an election is fair should be determined by the conditions under which the election is conducted, factors such as the presence or absence of an impartial election commission and the existence or non-existence of a level playing field. It should never be determined by whether a contestant has won or lost.

Malaysian elections are so notoriously unlevel that one should have no hesitation to conclude that Pakatan would have been swept to power in the 2008 election if there had been a free and fair election, considering the fact that the popular vote was virtually split at 50-50. 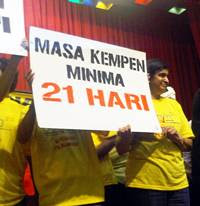 How can anyone consider Malaysian elections fair, when the election commission is unabashedly acting as ruling coalition BN's virtual agent, and the entire mass media of the country (with the exception of the Internet) serve as BN's propaganda machines to the complete exclusion of Pakatan?

Since the 2008 election, BN's election bribery has gone from covert to overt, famously dramatised by none other than Prime Minister Najib Abdul Razak himself when he publicly attempted to buy votes by offering instant cash aid to the tune of millions of ringgit subject to a BN win in two successive by-elections (Hulu Selangor and Sibu).

Strangely, or rather shockingly, while the video clip of this drama had been watched by a worldwide audience via YouTube, the presiding judge (Azahar Mohamed) threw out a subsequent election petition to nullify the Hulu Selangor by-election result on the ground of “lack of evidence”.

When even the court sanctioned such open bribery committed by the top leader of the ruling coalition, the floodgate for all kinds of corruption, intimation and abuse of authority was virtually thrown wide open to work in BN's overwhelming advantage. And this is exactly what happened in the recently concluded Sarawak state election, where BN swept to a landslide victory on the twin strategy of bribery and intimidation. 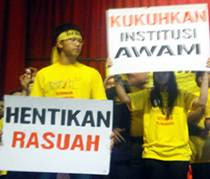 Under these circumstances, Bersih ought to be commended for its gallant and timely move to call for a mass rally whereby a petition will be delivered to the Agong to put a stop to the election system that has been turned into a complete mockery of democracy.

Among Bersih's reform proposals are: prohibition of vote-buying of any form, restoration of independence and impartiality to enforcing bodies on election offences, fair media access to all contesting parties, reform of the current dubious postal voting system and cleanse the electoral roll that is fraught with irregularities and phantom voters.

It will be seen from these proposals that the current Bersih move is not only not a threat to national interests, but a most reasonable and logical proposition to save democracy and restore justice and decency to a country where the state institutions have been pervasively perverted by BN's prolonged autocratic misrule.

With regard to the police's avowed refusal to grant a permit to the rally, we have to respectfully advice the police that they have no authority to obstruct such a peaceful rally. Freedom of assembly is a constitutional right guaranteed to all citizens, and the role of the police in such an event is to ensure that peace prevails throughout the rally.

Any attempt by the police or any quarter to disrupt a peaceful rally of such noble intentions will be construed as a serious breach of the constitution and will not be taken kindly by peace-loving Malaysians.

I'm really enjoying the theme/design of your weblog. Do you ever run into any browser compatibility issues? A couple of my blog visitors have complained about my blog not working correctly in Explorer but looks great in Firefox. Do you have any suggestions to help fix this issue?

Feel free to surf to my homepage: driveway Defined
Here is my page - produces

My partner and I stumbled over here different website and thought I may as well check things out.

I like what I see so now i'm following you. Look forward to checking out your web page repeatedly.

Hi there just wanted to give you a quick heads up and let you know a few of the images aren't loading properly. I'm not sure why but I think
its a linking issue. I've tried it in two different internet browsers and both show the same results.

Hello just wanted to give you a quick heads up. The words
in your article seem to be running off the screen in Chrome.

I'm not sure if this is a format issue or something to do with internet browser compatibility but I thought I'd post to let you know.
The design look great though! Hope you get the issue fixed soon.
Many thanks

Incredible! I'm really enjoying the design and style of your blog. Are you using a custom made theme or is this freely available to all users? If you do not want to say the name of it out in the public, please be sure to contact me at: jimgatlin@inbox.com. I'd really like to get my hands
on this theme! Kudos.

Here is my web page: weeknight

Today, while I was at work, my cousin stole my apple ipad and tested to see if it can survive a 40 foot drop, just so she
can be a youtube sensation. My iPad is now broken and she has 83 views.

I know this is entirely off topic but I had to share it with someone!

I've loaded your blog in Three totally different browsers and I must say this blog loads a lot quicker then most. Would you mind e-mailing me the company name of your web hosting company? My personal e-mail is: theresa.durkin@care2.com. I'll even sign
up through your own affiliate link if you'd like. Bless you

Wow! I'm really enjoying the style and design of your blog. Are you using a customized theme or is this readily available to all users? If you don't want to say the name of it out in the general
public, please make sure to e-mail me at:
teresa.burkholder@gmail.com. I'd really enjoy to get my hands on this template! Kudos.

Do you have a spam problem on this site; I also am a
blogger, and I was wondering your situation; we have created some nice methods and we are looking to trade
strategies with other folks, please shoot me an e-mail if interested.

Here is my web-site :: information

Today, I went to the beach with my kids. I found a sea shell and
gave it to my 4 year old daughter and said "You can hear the ocean if you put this to your ear." She placed the shell to her ear and screamed.
There was a hermit crab inside and it pinched her ear.
She never wants to go back! LoL I know this is completely off topic but I had to tell someone!

Woah! I'm really enjoying the template/theme of this site. It's simple, yet effective.
A lot of times it's challenging to get that "perfect balance" between superb usability and visual appearance. I must say you have done a amazing job with this. Also, the blog loads very fast for me on Opera. Outstanding Blog!

I was wondering if you ever thought of changing the layout of your site?
Its very well written; I love what youve got to say.

But maybe you could a little more in the way of content so people
could connect with it better. Youve got an awful lot of text
for only having one or two images. Maybe you could
space it out better?

Stop by my webpage :: http://shadowracer.aws.af.cm
my site: blog

Hello there! My partner and I often write
guest articles for other blog site owners to help gain publicity to
our work, as well as provide fantastic content to website owners.
It really is a win win situation! If you are interested
feel free to email me at: jackiemcneal@gmail.com so
we may talk further. Thanks!

Here is my weblog diggloco.jimdo.com

Heya! I just wanted to ask if you ever have any problems with hackers?
My last blog (wordpress) was hacked and I ended up losing many
months of hard work due to no data backup. Do you have any methods to protect against hackers?