IPPs- Najib's choice between funding UMNO or siding the rakyat.... 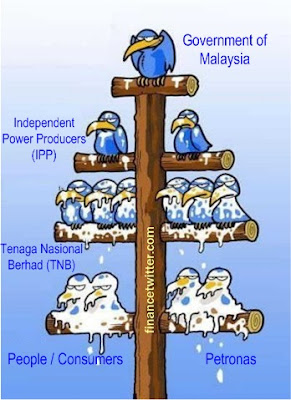 Pakatan Rakyat leaders scoffed at Prime Minister Najib Razak for alluding that his government was on the side of the people and not the immensely wealthy independent power producers, telling him "the proof of the pudding is in the eating".

They also slammed him for hypocisy for "sneaking in" two more new deals with tycoon Syed Mokhtar Albukhary's Malakoff and the Singapore unit of Francis Yeoh's YTL Power. Both deals were slipped in quietly within the past few weeks.

"Declassify the power purchase agreements if Najib is sincere. Why wait until Pakatan has exposed everything and his back is to the wall, then only say, BN is negotiating with the IPPs. Tell us, exactly what are you negotiating," PKR director of strategy Rafizi Ramli told Malaysia Chronicle.

Rafizi confirmed that PKR would proceed to sue the BN government for the lopsided agreements to be made public. So far, Najib has refused to lay bare the agreements, which forces Tenaga to buy power from the IPPs even though the country was running at excess capacity of more than 50 percent.

On Sunday, a defensive-sounding Najib told reporters his government was siding with the rakyat (or populace) and not the power barons as the opposition politicians have accused his administration of doing. Yet, in the same breath, he insisted the IPP contracts are fair.

“The IPPs now, most of their formulas are no longer one-sided,” Najib told reporters after the Umno Ampang division annual meeting.

“We are negotiating with IPPS but it is not accurate to say we are on IPPs’ side. We are fighting for the people. The government will explain further on the IPPs because we are still negotiating.”

Meanwhile, on the opposite side of town, his arch rival Opposition Leader Anwar Ibrahim promised to cut fuel prices within 24 hours if the Pakatan won the 13th general election, widely expected to take place within the next few months.

Anwar also slammed Najib for punishing the man on the street for sky-rocketing global crude prices, and chopping off subsidies on a slew of consumer essentials but leaving untouched the gas subsidy to the IPPs - which amount to some RM19 billion.

“When the rich get it, it’s incentives. When the poor fishermen get it, it’s subsidies,” Anwar said at a political lecture in Brickfields. 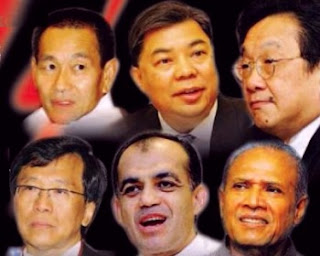 Now, lately we hear that Tenaga Nasional is buying power from Singapore-based PowerSeraya Ltd, a unit of YTL Power International Bhd, in anticipation of an expected 'shortage'.

It was also announced lately that Malakoff is to be awarded a project to build another 1,000 MW power plant. The plant will be given a 15 year concession to sell the power at 25 sen per kwh to TNB.

They can build all the plants they want, but TNB should buy at attractive rates, which should be at 6cents a kilowatt, not at a rip-off rate of 25cents.

MMC, Malakoff’s parent company, is owned by Syed Mokhtar Albukhary, who is one of the richest businessmen in Malaysia. This deal will make him richer still as he already owns at least 6 IPPs in Malaysia with Power Purchasing Agreements, which make them no-loss Enterprises.

There have also been news reports that allege that Syed Mokhtar was the only tycoon in town willing to fund Najib in the coming 13th General Election. With Seraya joining the picture, has YTL boss Francis Yeoh also agreed to fund UMNO now?

It looks like GE-13 will be called soon. Perhaps Parliament may be dissolved during the current sitting from June 13 to June 28, in which case, we would be looking at snap polls in July or end-August-early-September - just before the onset of Ramadhan or just after the fasting month perhaps during the long Hari Raya and Merdeka break.