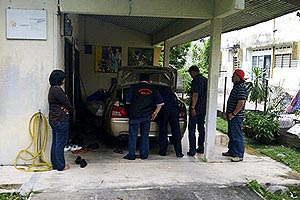 The office that houses the Bersih 2.0 secretariat has been raided by police. Police officers arrived about 12.30pm, according to Maria Chin Abdullah, who heads the NGO Empower. Empower is a member of Bersih 2.0, a coalition of NGOs which has come under intense pressure to call of the July 9 rally in support of electoral reform. The office is in Section 4, Petaling Jaya.

Maria, who was in Parliament House at the time, said she was told the police had turned up without a warrant. A source said the police have recorded the identity card numbers of employees.

"They are searching the premises and counting the number of Bersih T-shirts," the source said briefly before being stopped from taking the call.

"When they arrived, they were aggressive and tried to break (the door) with a cutter."

The 10-member police team, from the Selangor police contingent headquarters, was headed by one ASP Rosli. They have also recorded the MyKad number, name and telephone number of each of the 20 journalists camped outside the Empower office. They are also counting the leaflets found on the premises.

At a press conference in the Parliament lobby earlier, Maria said: “I was just informed that the police are taking statements from the staff, we have no other information." She challenged the inspector-general of police to prove that they have committed a crime and stop “such intimidation”.

Maria said 95 people have been detained to date for wearing the Bersih t-shirt and handing out leaflets on the rally.

“This is a basic human right, it's is our right to assemble peacefully and we have been stressing that it will be a peaceful march. We are not going out to create chaos as we have been accused."

Lawyer Latheefa Koya, who is at the Empower office, said the police had refused to show a search warrant to employees.

"They said they would pecah masuk (break in) if not allowed in, so the staff let them in," she told reporters.

"The investigation is under Section 27(5) of the Police Act. We do not have a list of objects they are seizing."

Section 27(5) regulates assemblies, meetings and processions, in relation to the absence of a police permit.

With havin so much content and articles do you ever
run into any problems of plagorism or copyright infringement?
My website has a lot of completely unique content I've either authored myself or outsourced but it seems a lot of it is popping it up all over the internet without my permission. Do you know any solutions to help prevent content from being stolen? I'd genuinely appreciate it.

My webpage design
Take a look at my web site :: sign

I'm really loving the theme/design of your web site. Do you ever run into any browser compatibility problems? A number of my blog readers have complained about my website not working correctly in Explorer but looks great in Safari. Do you have any recommendations to help fix this problem?

Hiya! My name is Valerie and I personally just desired to say
your blogging site rocks! It truly is funny because I use to have a weblog that practically had
an identical web address: http://www.blogger.
com/comment.g?blogID=1624275106440922314&postID=6723307907187900774 mine was
only a few characters different. In any case, I'm a big admirer of your weblog and if you ever would like a guest post you should email me at: krystalcoffin@arcor.de. I love writing!

Heya are using Wordpress for your blog platform? I'm new to the blog world but I'm trying to get started and
create my own. Do you need any coding expertise
to make your own blog? Any help would be greatly appreciated!

With havin so much content do you ever run into any issues of plagorism or copyright infringement?
My blog has a lot of unique content I've either created myself or outsourced but it appears a lot of it is popping it up all over the web without my permission. Do you know any techniques to help prevent content from being ripped off? I'd certainly appreciate it.

Wow! I'm truly enjoying the style and design of your website. Are you using a custom template or is this freely available to all individuals? If you do not want to say the name of it out in the general public, please make sure to email me at: latiaprewitt@gmail.com. I'd love to get my hands on this template!
Thanks a lot.

Look at my web site; stump

Heya! I just wanted to ask if you ever have any
trouble with hackers? My last blog (wordpress) was hacked and I ended up losing
several weeks of hard work due to no back up.
Do you have any methods to protect against hackers?

It's a pity you don't have a donate button! I'd definitely donate to this brilliant blog! I suppose for now i'll settle for bookmarking and adding your RSS feed to my Google account.
I look forward to new updates and will share this website with my Facebook group.

Write more, thats all I have to say. Literally, it seems as though you relied on the video to make
your point. You clearly know what youre talking about, why throw away your intelligence on just posting videos to your site when
you could be giving us something informative
to read?

I'm not sure why but this site is loading incredibly slow for me. Is anyone else having this issue or is it a problem on my end? I'll check back
later on and see if the problem still exists.

Hey I know this is off topic but I was wondering if
you knew of any widgets I could add to my blog that automatically
tweet my newest twitter updates. I've been looking for a plug-in like this for quite some time and was hoping maybe you would have some experience with something like this. Please let me know if you run into anything. I truly enjoy reading your blog and I look forward to your new updates.

Here is my site - computer