Whose photo did police gave... 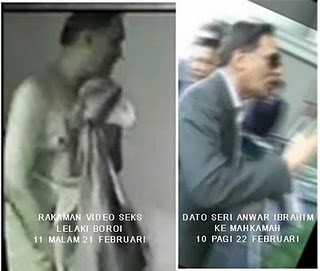 In a bid to drown out the negative publicity from the Bersih 2.0 rally and to further smear Opposition Leader Anwar Ibrahim, the Najib administration went all out to shield the Datuk T trio while giving full opportunity to their lawyers to suggest there was a 99.9% match between the face of the man in the sex video and a photo of Anwar given to the US expert by the police.

"If it is true, you can be 1,000% sure that the AG and Najib would have made the Datuk T trio plead not guilty and claim a prolonged trial. Why have they suddenly stopped at this stage? Firstly, who's photo did the police give to the US expert? Was it really Anwar's," Batu MP Tian Chua told Malaysia Chronicle.

"It is also telling that they only did a match on the face using a photo that could be anyone's, but not the full body comparison and this is a sex tape. We have expected the worst, given the recent atrocious DNA reports from the Chemistry department in Sodomy II. I think it is not a surprise to anyone anymore, these sort of tactics."

Indeed, after making a showy entrance and initially protesting the charges preferred by the Attorney General, the Datuk T trio smiled broadly before pleading guilty. They were fined a shockingly low combined amount of RM5,500 or be jailed a total of 6 months. Perhaps they felt they were being heroes, but to the rest of the country, the Datuk T sex video marked a low in Malaysian political skullduggery, even by the standards of the UMNO elite.

So intense was the video's impact that it triggered a key reversal point in Prime Minister Najib Razak's popularity. Since then the negative sentiments against his leadership have increased and demands are already building for him to step down as UMNO president in the party polls slated for hext year.

Even today, when the facts of the case were read out, the court interpreter made sure to link Anwar's name to the man in the sex video several times. This despite the fact that for the charges preferred against the Datuk T trio, the identity of the person filmed having sex with a prostitute does not matter at all.

The trio are businessman Shazryl Eskay Abdullah, former Malacca chief minister Rahim Thamby Chik and Perkasa treasurer Shuaib Lazim. Eskay and Shuaib were jointly charged for possession and distribution of pornography under Section 292(a) of the Penal Code, while Rahim was charged for being an accessory to the alleged crime under section 109 of the Penal Code.

If found guilty, they could have been fined and or jailed for up to 3 years. But Eskay was fined only RM3,000 or three months' jail, Rahim was fined RM1,000 or one months' jail and Shuaib RM1,500 or 2 months jail.

Meanwhile, the court was also told that in the tape, the woman had given the man oral sex before the couple went on to have sexual intercourse. It also heard that a US expert had found no tempering and no images being "superimposed" in the video footage.

That paved the way for Eskay to insist, "Not resembling, but it's Anwar."

During mitigation by the defence's lawyer, it was submitted that the three men had "honourable" intentions and they screened the tape because they wanted to expose and stop Anwar from becoming prime minister. Their lawyer Shafee Abdullah even described their act as "minor offence".

More damning still, Shafee also said the US video experts had compared images of the man in the video with a photo of Anwar. They confirmed that both were identical.

The report was undertaken by Dartmouth College in Hanover, New Hampshire, and was based on a facial recognition analysis. It showed a 99.99% match of the male's face in the video with that of an Anwar photo given by the police. 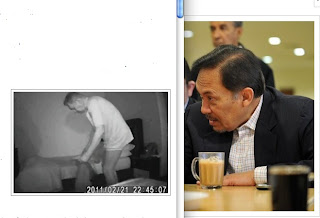 But Anwar's supporters brushed off the report.

"If you look Sodomy II and Sodomy and all the police custodials deaths especially Kugan Ananthan and Teoh Beng Hocks, there was clear tampering with evidence by the authorities. Why should the sex video be different especially when it can be used to harm Anwar. Kugan died because he was beaten until his kidneys collapsed but the autopsy report from the police said he died from fluid in the lungs," said Tian.

"Same with Beng Hock's so-called suicide note and that came directly from the AG. The litmus test is very simple. Malaysians just need to ask themselves, do they trust Gani Patail, Khalid Abu Bakar and best of Mr Najib-Altantuya."

The sex tape suddenly surfaced in late March. The Datuk T trio had organized a press conference, inviting journalists and editors to view the video which shows a man purportedly resembling Anwar having sex with a female prostitute. In Malaysia, it is illegal to possess or to publicly show pornographic material.

The trio were well supported by a crew of assisstants that many reporters claim were from the police Special Branch. After showing the tape, the men gave Anwar and his wife Wan Azizah a week to resign from politics, or they would make public the video. But none of the Datuk T accomplices were charged. Neither did the AG prefer any blackmail or criminal intimidation charges although the three men had confessed to trying to pressure Anwar to quit.

Meanwhile, the smear campaign is expected to continue as the Najib administration struggles desperately to deflect attention from the Bersih rally. The Datuk T trio may not have claimed trial as they had been expected to. Even so, they have already put Anwar on trial by the media.

It can be expected that the three men will be giving press conferences, newspaper interviews and magazine spreads in an all-out bid to smear Anwar and at the same time drown out Bersih,

UMNO knives are also expected to go after the newly-minted PAS deputy president Mohamad Sabu and there have already been preliminary attempts to imprint onto the public's mind that Mat Sabu too has sexual skeletons in his closet.