Tourism Ministry spend RM1.8mil for a Facebook page which you can get for free.... 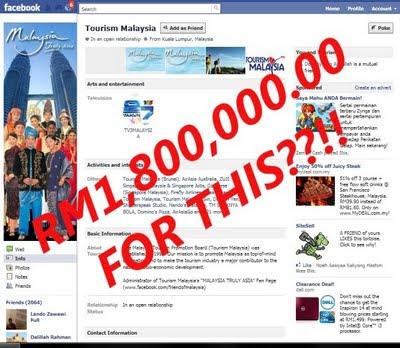 The Tourism Ministry came under fire again today, as MPs questioned why it had spent RM1.8 million to start and maintain its Facebook page - yet another on the list of controversial projects.

Anthony Loke (DAP-Rasah) slammed the decision to use so much money when the social networking site can be used free of charge.

“On my last check, there are 20,308 fans on the ministry's Facebook page. Comparably, the 'Visit Penang' Facebook page, for which the Penang government did not spend a sen, got over 100,000 fans. Why spend RM1.8 million?” he asked during Question Time.

Loke said it is hard to believe that not one person in the ministry has knowledge of how to maintain or update a Facebook account. He stressed that the Tourism Ministry could have easily sought advice from various parties, including BN and opposition MPs, many of whom are ardent users of social networking sites.

“You don't even have to ask members on this side (opposition). There are those among the backbenchers, such as Kota Belud and Rembau... they can come in as consultants,” he said, referring to Umno MPs Abdul Rahman Dahlan and Khairy Jamaluddin, who are both heavy Twitter users.

Deputy Tourism Minister James Dawos Mamit said the budget covers the cost of hosting various activities on the Facebook page, including six interactive Flash applications, development and maintenance work and advertising, which was tendered out to a company, Impact Creations Sdn Bhd, on a three-year contract from 2011-2013.

James, who stood in for Minister Ng Yen Yen(right) despite being sick and suffering a sore throat, added that the ministry spent nearly RM300,000 to develop each of the six applications on their Facebook page. 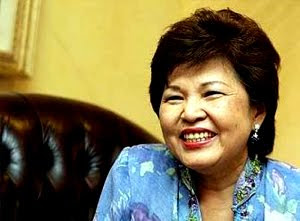 Khairy, in a supplementary question, agreed with Loke that the RM1.8 million budget “looks like a waste” of funds, stressing that the low interest in the ministry's Facebook page is not reflective of the expenditure.

He acknowledged that it would take money to maintain the page and its various activities, but insisted that by engaging a company to focus on promotional work, there should already be big returns.

“Currently there are 2,013 'likes', and the page design is nothing extraordinary. It's only using the same template. We don't even have to look at the Penang tourism page; some of the MPs here are even more popular,” he said, while asking how the ministry will measure the success of its campaign.

James pointed out that Impact Creations was engaged to run an advertising campaign to promote domestic tourism, particularly among Generation Y Malaysians who are generally more tech-savvy.

He said the success of the ministry's social networking campaign, including advertising, will be measured based on the national return of investment in terms of an increase in domestic tourists.

Greetings! My spouse and I often publish guest posts for other weblog owners
to help gain publicity to our work, as well as provide
superb content to website owners. It's a win win situation! If you're interested
feel free to email me at: nadia_hardwick@aol.com so we may communicate further.
Cheers!

Woah! I'm really loving the template/theme of this blog. It's simple, yet effective.

A lot of times it's very hard to get that "perfect balance" between user friendliness and appearance. I must say you have done a awesome job with this. In addition, the blog loads extremely fast for me on Internet explorer. Excellent Blog!

Here is my weblog; http://icecanron.bloggd.org

I don't know if it's just me or if everybody else experiencing problems with your site.
It looks like some of the text within your posts are running off the screen.
Can someone else please provide feedback and let me know if
this is happening to them as well? This might be a problem with my web browser
because I've had this happen previously. Many thanks