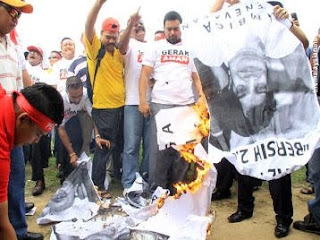 Perkasa kicked off its Bersih 2.0 counter-protest here in Kampung Baru today by burning images of Bersih chairman Datuk Ambiga Sreenevasan and issuing a warning to the Chinese to stay indoors as “anything could happen”.

Perkasa Datuk Ibrahim Ali, who earlier appointed himself “war general”, said if electoral reform coalition Bersih goes through with its July 9 rally, he will not be held responsible for any untoward incidents which may occur.

“Imagine if chaos erupts. If the Bersih rally is not cancelled... I believe the Chinese community will have to stock up on food.

“Yes, anything can happen. And so I ask the police to act and use whatever powers are at their disposal,” he told some 500 supporters who gathered at Kelab Sultan Sulaiman here for the launch.

Ibrahim also suggested that Ambiga — described in a flyer being passed as “a dangerous Hindu woman” — was working for foreign powers seeking an excuse to interfere in Malaysia’s internal affairs.

He cited the former Bar Council president’s defence of Lina Joy’s right to convert from Islam and her involvement in the interfaith council as examples of her repeated “illegal actions”.

“Perhaps she is an agent of the Jews,” he said.

The Pasir Mas MP also repeated a claim made by Utusan Malaysia today that the opposition will use the rally to trigger an uprising similar to the ones seen in Egypt and Libya before forcing their choice of prime minister upon the people.

“If an emergency declared, will the Agong be able to appoint a caretaker leader? Maybe they (the opposition) will take to the streets and demand that they take over the government,” he said. 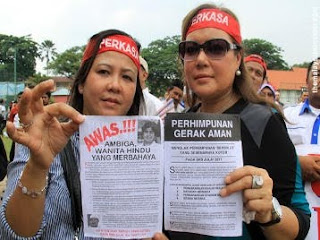 PR component parties and activists are gearing up to march on July 9 in the second such rally by election watchdog Bersih.

The first rally in 2007 saw up to 50,000 people take to the capital's street, before they were dispersed by police armed with tear gas and water cannon.

The 2007 rally has been credited for the PR’s record gains in Election 2008, where the opposition pact was swept to power in five states and won 82 parliamentary seats.

PAS has promised to bring some 300,000 protestors this year in hopes that it will galvanise support for the opposition in the next general election, expected to be called within a year.

Perkasa has pledged to send 20 buses from each of the 10 peninsular Malaysian states, in addition to supporters from 164 other non-governmental organisations. Umno Youth has also said it will march on July 9 to counter the Bersih rally.

30 % of pas members show their songkok..ibrahim ali and perkasa will be buried alive..my malay friends told me ..they will protect and ring every chinese , indian and protect us,.,i am going.

Hi! This is kind of off topic but I need some help from an established
blog. Is it very difficult to set up your own blog?

I'm not very techincal but I can figure things out pretty quick. I'm thinking about setting
up my own but I'm not sure where to begin. Do you have any points or suggestions? Thank you

I am wondering which blogging platform you're running? I'm
new to running a blog and have been thinking about using the Vox platform.

Do you consider this is a good platform to start with?

I would be very thankful if I could ask you some questions through e-mail so I can learn a
bit more prior to getting started. When you have some free time, please contact me at: judy_dupree@bigstring.

Have a look at my web-site: search

Howdy! I know this is kinda off topic nevertheless I'd figured I'd ask.

Would you be interested in trading links or maybe
guest writing a blog post or vice-versa? My blog covers a
lot of the same subjects as yours and I think we could greatly benefit from each other.
If you are interested feel free to send me an email. I look
forward to hearing from you! Superb blog by the way!

This design is incredible! You certainly know how to keep a reader amused.
Between your wit and your videos, I was almost moved to start my own blog
(well, almost...HaHa!) Fantastic job. I really loved what you had to say,
and more than that, how you presented it. Too cool!

Have a look at my web page - chemical
my web site: stumps tree

My developer is trying to persuade me to move to .net from
PHP. I have always disliked the idea because of the costs.
But he's tryiong none the less. I've been using WordPress on a number of websites for about a year and am nervous about switching
to another platform. I have heard great things about blogengine.
net. Is there a way I can import all my wordpress posts into it?

Any help would be really appreciated!

Hi there just wanted to give you a brief heads up and let you
know a few of the images aren't loading correctly. I'm
not sure why but I think its a linking issue.
I've tried it in two different browsers and both show the same outcome.