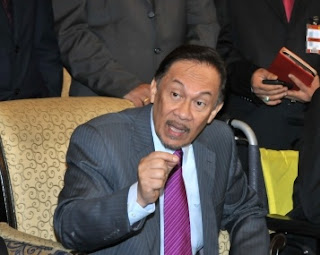 Opposition Leader Anwar Ibrahim's return to Parliament after a six-month suspension was marked by a riotous scene barely ten minutes into question time.

Anwar, who posed the second question of the session, had asked about the Federal Land Development Authority's (Felda) financial standing and its rationale in borrowing more than RM6 billion from the Employees Provident Fund (EPF).

Ismail Abd Muttalib (BN-Maran), in a supplementary question, accused the opposition MPs of being “jealous” of Felda's success in helping to uplift the lives of settlers.

Citing from the Buku Jingga, Ismail said that Pakatan aims to dissolve Felda and divide the land among second and third generation settlers.

Ismail then asked Deputy Minister in the Prime Minister's Department Ahmad Maslan to comment on the “potential impact” of such a move.

But before he could finish his question, Tian Chua (PKR-Batu), Khalid Samad (PAS-Shah Alam) and Mohamad Aziz (BN-Sri Gading) interjected and a shouting match ensued.

Anwar, who was in a crisp grey suit and a bright purple tie, stayed poised through waiting for the verbal volley to settle down. 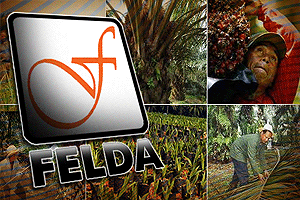 Speaker threatened to boot out MPs

PKR deputy president Azmin Ali (PKR-Gombak), who was the only person heard over the arguments, said: “Let me answer. What does the deputy minister (Ahmad) know about Buku Jingga?”

Refusing to back off from disregarding the question, Ahmad continued: “I don't see any problems with shutting down Felda Plantations.”

However, House Speaker Pandikar Amin Mulia interrupted Ahmad from ending his reply, saying that there was no relevance, and asked Sapawi Ahmad (BN-Sipitang) to pose the next question.

The decision, again, was met discontent from Abdul Rahman Dahlan (BN-Kota Belud), Lilah Yasin (BN-Jempol) and Khairy Jamaluddin (BN-Rembau) who all stood up in unison, wanting Ahmad to be allowed to answer the question.

Pandikar Amin then issued a stern warning and threatened to evict the next MP who stood up, before order was restored.

Prior to the heated exchanges, Ahmad, in response to Anwar's question, defended Felda, saying that “it has not burdened” settlers with various loans taken out to fund its projects and investments.

Ahmad said Felda's annual report alone showed that it is a profitable venture and has a “strong” financial standing and the RM6billion EPF loans is a “win-win situation” for both parties.

“There is nothing to hide. The outcome of Felda's profits are recorded in the 2010 annual report which was distributed to all here,” said Ahmad.

“(And) the stupidity of Felda Global's management is parallel or bigger than the mismanagement of Sime Darby,” said Anwar, to which Ahmad denied the allegations.