Khir Toyo and the AG's foxtrot: Secrets that need not be revealed at the trial...

Former Selangor chief minister Khir Toyo was charged with obtaining for himself and for his wife Zahrah Syed Kecik valuables for a consideration which he knows to be inadequate.

These were two land lots and a house at No 8 and 10, Jalan Suasa 7/1 L, Shah Alam, from Ditamas Sdn Bhd through its director Shamsuddin Hayroni at the price of RM3.5 million when in fact the lots were bought by Ditamas on Dec 23, 2004 at the price of RM6.5 million.

Khir's trial is still playing out in the courts and though many Malaysians think it is a corruption case, it is in fact more specifically “Public servant obtaining any valuables, without consideration, from persons concerned in any proceedings or business transacted by such public servant” - Section 165 of the Penal Code.

Section 165 of the Penal Code is not worded specifically as the Malaysian Anti-Corruption Commission Act.

Asked why Khir was not charged under the Malaysian Anti-Corruption Commission Act, all the Attorney-General Abdul Gani Patail would say was: “Section 165 of the Penal Code is prescribed under the MACC Act.”

No need for Khir to prove Shamsuddin did not benefit

Prescribed, maybe, but Khir's charge is still not tantamount to corruption or receiving a bribe because under the MACC Act, weight also falls on the defense to prove that the other parties involved did not gain any benefit from the transaction.

The MACC Act would have forced Khir to prove that he did not, in his capacity as Mentri Besar, offer any favors to Shamsuddin, the director of Ditamas. Whereas Section 165 does not require this.

This was why Shamsuddin, who was also charged along with Khir, walked away a free man. It does not matter if he did get something huge from Khir in return for selling the properties at such a deep discount. Khir does not need to prove Shamsuddin did not get anything. And so if Shamsuddin did gain, what does that matter? Section 165 deems Shamsuddin the victim in the incident.

Yes, Khir can afford to smile. Shamsuddin too does not have to tell whether he stood to gain anything from giving Khir a discount. That aspect of the deal can continue to remain their special secret. 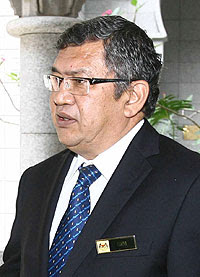 How kind of the AG, the MACC and the BN government.

Under Section 165, Khir stands to spend 2 years in prison rather than the 20 under the MACC Act. In other words, Khir Toyo has swung another discount - this time amounting to a savings of 18 years from time in prison.

Smart move by the powers-that-be in protecting their own.

No need to tell where he got the millions from

There is also no obligation for Khir Toyo to state how he amassed the millions used for the purchase and subsequent renovations to the house. He can stick to his statement that he took a loan from an overseas bank so long as he produces documentation to support his claim.

Any line of questioning as to where and how he gained millions of ringgit in spare-change can be dismissed as being irrelevent to the case.

Yet, those are the real questions, aren't they? The rakyat or populace would demand to know, how is it that a government servant could amass so many millions. RM3.5 million for the purchase and an additional RM6 million cash to renovate the house.

Did Khir Toyo grant any favors to Shamsuddin Hayroni in return for the RM3 million discount?

Was this an isolated case or were there many more dealings that Khir undertook during his tenure as Mentri Besar, where he gained monies or additional properties advantageously and also corruptly?

These are the questions that will never be asked during the trial and never will see the light of day.