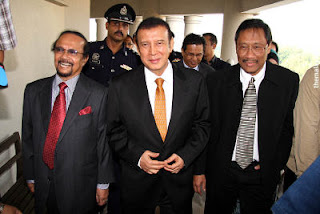 The three individuals behind the sex tape which featured a man resembling Opposition Leader Anwar Ibrahim were charged in Kuala Lumpur Magistrate Court today - three months after they screened the video at a hotel to a group of journalists.

Businessman Shazryl Eskay Abdullah and former Perkasa treasurer Shuaib Lazim were jointly charged for possession and distribution of pornography under Section 292(a) of the Penal Code.

They had allegedly committed the offence between 10.30am and 12pm at the Carcosa Seri Negara hotel on March 21.

Magistrate Aizatul Akmal Maharani has allowed a short break for the defence lawyers to consult the trio.

When the facts of case was read out to the three accused, the court interpreter mentioned "resembling Anwar Ibrahim" four times.

It was also mentioned that a US expert report has found no tempering and no images being "superimposed" in the video footage. The report also confirmed that the man resembles Anwar and that the woman in the sex video was from China. It added that the woman gave the man oral sex and the couple went on to have sexual intercourse.

When magistrate Aizatul asked if the accused understood the facts of the case, Eskay said he did not agree with the content of US expert report - that the man in the video resembles Anwar.

"Not resembling, but it's Anwar," he told the court.

There are two widescreen televisions in the courtroom. It is possible that the video could be screened for the magistrate to ascertain whether the clip is really pornographic.

It was previously reported that several journalists and editors were shown a video clip of a man resembling Anwar having sex with a woman. Shazryl and Rahim then unmasked themselves to be the ones responsible for the screening in a press conference two days later.

Although Shazryl said that he had the only copy of the video and that it was surrendered to the police, clips of it were later posted up on a pro-Umno blog. It did not take long before the full 23-minute video to be posted up on the Internet.

Most recently, it was reported that the video have been mailed to politicians as well as being distributed openly in many parts of Selangor. Some were left on car windshields at shopping mall car park in Johor Baru.

The “Datuk T” trio pleaded guilty and were fined in a magistrate’s court here this morning over their involvement in the screening of a sex video allegedly featuring Pakatan Rakyat de facto leader Datuk Seri Anwar Ibrahim.

Abdul Rahim was fined RM1,000 or one month's jail.

'As such, he told the court that Anwar should be charged under sections 192, 193 or 199 of the Penal Code for lodging a false report, denying his identity in the video.'