Police did not ask for permission, says speaker... 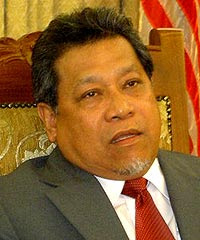 “The police cannot enter Parliament grounds without the express consent of the speaker. The police can only provide policing function on the request of the Parliament officials, sergeant-at-arms and the speaker,” said Lim (DAP-Ipoh Timor).

Lim argued that the act of police recording statements from Azmin Ali (PKR-Gombak) and Mohd Firdaus Jaafar (PAS-Jerai) at the MPs' lounge yesterday goes against the principle of separation of powers.

Azmin said he was caught off-guard as the cops appeared unannounced, while Mohd Firdaus told reporters that he had invited them over to record his statement.

Pandikar then said that he had also found out about the matter after reading about it in the media.

“We didn't receive any official application from the police to do so but I understand from the news that both parties (the police and the MPs) had mutually agreed on it,” he told Lim.

Police officials from the Selangor police contingent headquarters had visited Parliament to take statements from Azmin and Mohd Firdaus, claiming that they had recommended in their public ceramahs earlier this month to support and join in the Bersih 2.0 rally on July 9. 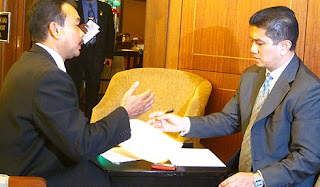 Bersih 2.0 will march to the palace to hand over an eight-point memorandum to the King seeking, among others, the use of indelible ink and a 21-day campaign period.

However, Lim replied that despite the alleged mutual agreement, the police's actions had still contravened the special privileges accorded to the members of parliament.

“I ask for the parliamentary rights and privileges committee to look into the matter and come up with a proper guideline,” urged Lim.

“I will look into it and I will call the relevant people to explain what happened,” Pandikar reiterated.

Meanwhile, Home Minister Hishammuddin Hussein said it is illegal to wear clothes related to illegal activities. As such, the detention of those wearing Bersih 2.0 T-shirts is justified, Hishammuddin told reporters today.

"If the Bersih T-shirt is related to an illegal activity then whatever they are wearing is illegal," he said.

To date, about 100 people have been hauled up for wearing the yellow Bersih 2.0 T-shirts, while those selling it have also been taken in for questioning.

Fourteen DAP and PKR members who were detained in Sungei Siput, Perak, this morning for wearing the T-shirt, were told that it “instigates people to attend the Bersih rally” planned for July 9 in Kuala Lumpur.

Is Malaysia a police state?? The police now hold the power. They are in control.