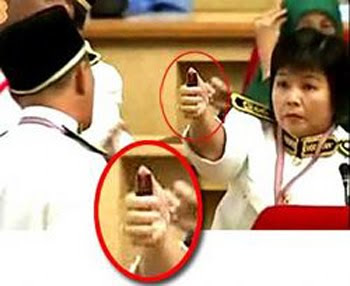 The Ipoh High Court has ruled that Perak deputy speaker Hee Yit Foong had assaulted Aulong assemblyperson Yew Tian Hoe with a pepper spray during the state assembly sitting on May 7, 2009.

Judicial commissioner Tarmizi Abd Rahman granted Yew's application for an injunction, with costs, to restrain Hee and her agents from any further assault against him. The court has yet to rule on damages sought.

The May 7 sitting was the first after the BN took over the Perak government with the support of three former Pakatan Rakyat assemblypersons, including Hee. The sitting degenerated into chaos after Pakatan refused to surrender the speaker's post to BN which controlled the majority seats.

BN then summoned plainclothes police personnel to drag Pakatan speaker V Sivakumar(left,below) out of the House and to escort BN speaker R Ganesan to his seat. In the scuffle between lawmakers on both sides, Hee allegedly assaulted the DAP's Yew with a pepper spray.

After the Attorney-General's (AG's) Chambers failed to act against Hee, Yew filed a civil suit against Hee on June 26, 2009. Yew claimed that he had sustained injuries to his left eye, suffered mental shock, distress, trauma and "great humiliation and shame in public".

Hee had denied the allegation, initially claiming that the pepper spray was a hotel key-chain and then a pen drive.

She then admitted that it was a pepper spray but said it did not belong to her. 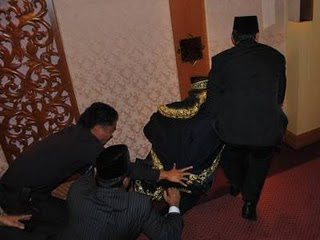 In an immediate reaction to the High Court ruling, Perak Pakatan Rakyat demanded that the AG's Chambers should prosecute Hee under Section 323 of the Penal Code, with voluntarily causing hurt.

Nga, who attended the hearing, said Perak Pakatan has also requested the Sultan of Perak to withdraw Hee's datuk-ship.

"Malaysia is the first nation where an assemblyperson has hurt a colleague during a sitting. This had brought much shame to all Perakians as well as Malaysians," said Nga.

Hee was elected Jelapang assemblyperson on a DAP ticket in the 2008 general election. She was the first non-Malay woman to be appointed deputy speaker of a legislative assembly when Pakatan formed the state government.

However, in February 2009, she quit her party alongside Jamaluddin Mohd Radzi (Behrang) and Mohd Osman Jailu (Changkat Jering) - both of who left PKR - to become pro-BN Independents.

This led to the downfall of the 11-month-old Pakatan state government. A constitutional crisis was triggered when the sultan consented to BN forming the state government without going through fresh elections.