Anwar will be convicted – come what may.... 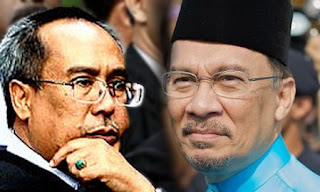 What is puzzling is the Anwar trial judge’s refusal to recuse himself from the trial. As long as a bias is perceived by the accused that alone should disqualify him in the interest of justice.

Nobody is surprised by High Court Judge Zabidin Mohamed Diah’s ruling refusing to recuse himself from hearing Anwar’s case. He was right on the mark, as expected!

The funny thing about Anwar’s court trial is that the judgments are predictable. From Day One it was very apparent that the apparatus of the state would be used stringently to put away Anwar for good. A free Anwar, as perceived by many observers, would sound the death-knell for the BN.

Every step and every action taken during the course of his trial – all point to the inevitable conclusion that Anwar will be convicted, come what may.

He had to be arrested even though he had given his word that he would be reporting to the police station as required. He was waylaid and arrested like a common criminal and detained for the night – even though it was indicated earlier that he would be released that evening – because it is very apparent that his fresh DNA was urgently needed to implicate him. They had to create a situation so that the DNA could be obtained. That was exactly what happened.

They extracted his DNA from the water bottle, towel and tooth brush which he had to use as he was detained overnight. Strict orders were given that these items should not be removed. He was tricked to leave behind his DNA.

The pertinent question is: why couldn’t they use his earlier DNA obtained in 1998? This clearly exposes the plot. Fresh DNA was required to implicate Anwar. If the 1998 DNA was used, the plot would have been exposed and therefore it could not be planted to implicate him, according to thinking Malaysians.

Apart from the police, many believe that even the court conspired to deny him certain documents that were crucial to his defence. When a man claims that he was a victim of political intrigue in order to convict him, the court should have allowed him access to vital information to defend himself. Contrary to the dictates of justice, the court denied him this information.

It is the duty of the court in any civil society to ensure that the accused is entitled to a fair trial. A fair trial would entail access to information that would help him in his defence. When the court does not assist in this respect, it becomes a sham trial and the court is guilty of contributing to this sham.

According to the medical report in the possession of Malaysiakini, Saiful was never sodomised by anyone, least of all by Anwar Ibrahim. Dr Mohamed Osman Hamid from the Hospital Pusrawi had confirmed this fact after physically examining Saiful on 28 June 2008. Is this the evidence that is being suppressed because it would have helped Anwar to mount a vigorous defence?

How would it have affected the doctor and his profession if his notes were made available to the defence?

What was his interest in cooperating with the prosecution to disallow this information to Anwar?

Was he scared that his notes could clear Anwar?

Was he fearful that the scrutiny of the notes by Anwar’s experts would punch holes in his testimony?

There are many other instances and examples to confirm the existence of a plot. All these have been highlighted but to no avail.

Notwithstanding all this, what is puzzling is the judge’s refusal to recuse himself from the trial. As long as a bias is perceived by the accused that alone should disqualify him in the interest of justice.

You don’t even have to prove bias, but the mere perception is reason enough to disqualify himself to ensure a fair trial. 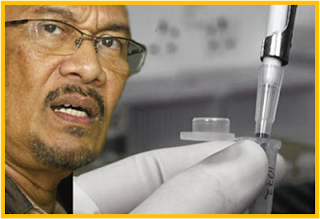 After having come to the following conclusions emphatically:

that he had found Saiful to be a truthful and reliable witness and his evidence is intact despite lengthy cross-examination by the defence;

that Saiful had narrated in detail the sexual intercourse when he was under examination-in-chief;

that the testimony of three Kuala Lumpur Hospital doctors corroborated Saiful’s evidence that there was penile penetration with the use of lubricants;

that the evidence of chemists Dr Seah Lay Hong and Nor Aidora Saedon – who established that the DNA profile of the semen found in the anus of Saiful matched that of Anwar’s – was acceptable;

that there was no difficulty in accepting the evidence of these expert witnesses;

that there was no room for the tampering of evidence;

that Anwar had introduced his penis into the anus of Saiful until ejaculation;

that Saiful had given a blow-by-blow accountof the sexual act in a room of the condominium;

what kind of a judgment will Zabidin be delivering after the trial?

That final judgment has to reflect and confirm his above conclusions. If there is anything that is to the contrary, it would discredit his conclusive and emphatic judgment that ordered Anwar to stand for trial.

It would be in the interest of justice for a new judge to hear Anwar’s case.- writes P Ramakrishnan,Aliran.

the idiot judge should be removed immediately in order to obtain fair and just judgement otherwise it appears that we are practising rule of the jungle.....