Scorpenes and Altantuya: Does Khairy know something that 1Malaysia don’t.... 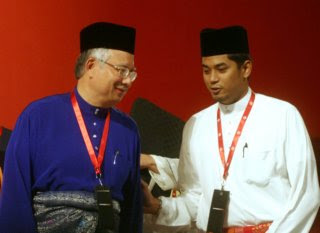 The noose is tightening. Although it is his former bodyguards who are on death row, Prime Minister Najib Razak is feeling the heat as his alleged former mistress Altantuya Shaariibuu returns to haunt him via a trial due to begin in France within the next two months.

The Turks in UMNO are already eyeing the prime minister’s post. And before anyone starts pointing fingers at Najib's immediate successor, Deputy Prime Minister Muhyidden Yassin, they should cast an eye at Khairy Jamaluddin, the Umno Youth Chief.

Khairy is no ordinary Youth leader. He is not only enormously wealthy but also richly connected. Khairy is the son-in-law of former premier Abdullah Badawi and has previously been reported to have said he wants to be PM by age 40. The Oxford graduate is now 34.

There is widespread belief that during the 2006 Altantuya trial, Badawi was prepared to take Najib out of the picture. It would have worked if not for the insistent hand of Mahathir Mohamed, who still itched to control and govern the country despite retiring in late 2003. Dr M wanted to ensure that Najib, who was then the DPM, would replace Badawi, whom he hated for scrapping several of his beloved mega-projects and thereby stopping the tap of benefits accruing to these deals from flowing back to him.

The grandfather of Malaysian politics was pulling strings to eject Abdullah and his hand is evident in how the whole trial was mismanaged by the Malaysian judiciary and police department. A fact which was clearly stated in the US Embassy cables released via WikiLeaks, with one cable calling it, “prosecutorial misconduct”.

The cables also drew attention to an attempt by Badawi to use the Altantuya trial to sink Najib. It was an attempt which Najib fended off successfully with help from the powers that be in UMNO and their corrupt hold on the various institutions of government, such as the police, the immigration and even the judiciary.

Fast forward to 2011. French investigators are now preparing to bring to trial a case against French arms-dealer DCNS for allegedly giving bribes to secure the Malaysian acquisition of three submarines, of which Altantuya and Razak Baginda are alleged to be involved on behalf of Najib.

Unable to break into the UMNO old-boys club

The role that Khairy Jamaluddin is alleged to have played in opening up the Altantuya case to the public has come into focus as a result of renewed interest ahead of the French court hearings due to take place soon. Khairy’s immediate link to the Altantuya case can be found in a written report by military intelligence that was allegedly passed to Abdullah Badawi and to himself for safe-keeping.

And though Badawi’s attempt was foiled by Najib and Mahathir, Khairy’s current push up the UMNO ranks may not be so easily foiled. Especially now when the stakes are much higher and Najib in a precarious position after two years in the top job that has yielded little results.

Khairy married into UMNO, but Badawi is not part of the elite such as the Razaks, the Husseins and the Mahathirs. Anyone other than a scion from these families will have a tough time breaking in. Even Badawi was merely meant tobe a seat-warmer.

But Khairy is much more ambitious than his dad-in-law. As an outsider, he has the appeal that attracts the Malay intellectuals. A fresh voice, despite being tainted by corruption and past racist politicking. Shut out by Mahathir and of course also by Najib, Khairy is the only Youth Chief not to have a ministerial or deputy ministerial portfolio.

Recently, he has tried to strike out on his own, calling on the Najib administration not to hike fuel prices. Instead, Khairy called on the government to cut down unnecessary projects, but for his troubles, he was slammed by his own party colleagues although it won him a modicum of respect from the general public.

It is highly unlikely that Khairy Jamaluddin would be on the list of those the French courts might invite to testify. But certainly, he would be the last person, Najib would want on the witness stand. 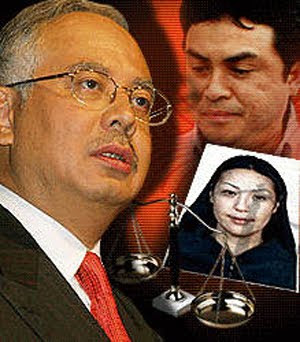 Will Khairy spill the beans - one way or another

Even without the French probe, there is speculation Khairy has the trump card that could drive the final nail into the coffin for Najib and even his wife Rosmah.

Bear in mind, Najib’s fingerprints are all over the Altantuya murder.

If it is proven that a shady deal was in place, then Najib has to be responsible for it. If the so-called military report were to suddenly surface, Najib would really be in hot soup.

In the kill-and-be-killed scenario of UMNO politics, perhaps a player with massive destructive power has emerged. And it looks like this person could be Khairy Jamaluddin. Would Khairy step up to the plate and hammer the final blow to an embattled and war-weary Najib?

This remains to be seen but the spectre of Altantuya would stay on until she has received the justice that rightfully belongs to her.

Exploring reddit.com I noticed your website book-marked as:
Blogger: tumpang sekole...?. I am assuming you book marked it yourself and
wanted to ask if social book-marking gets you a ton of traffic?
I've been thinking about doing some bookmarking for a few of my websites but wasn't certain if it would generate any positive results.
Thank you so much.

Incredible! This blog looks just like my old one! It's on a completely different subject but it has pretty much the same layout and design. Outstanding choice of colors!

This design is incredible! You definitely know how to
keep a reader entertained. Between your wit and your videos, I
was almost moved to start my own blog (well, almost.
..HaHa!) Fantastic job. I really loved what you had to say,
and more than that, how you presented it.
Too cool!

Here is my blog: alarm
Also visit my homepage ... concrete

Hiya. Sorry to bother you but I happened to run across your blog site and noticed you happen to be using the exact same template as me.
The only issue is on my site, I'm battling to get the page layout looking like yours. Would you mind contacting me at: victorina.coffin@web.de so I can get this figured out. By the way I've bookmarked your site: http:
//www.blogger.com/comment.g?blogID=1624275106440922314&postID=4126440733214213744 and will
certainly be visiting often. Thankyou!

Check out my homepage undergarment

Greetings from Carolina! I'm bored at work so I decided to browse your site on my iphone during lunch break. I really like the info you provide here and can't wait
to take a look when I get home. I'm amazed at how fast your blog loaded on my mobile .. I'm
not even using WIFI, just 3G .. Anyways, very good site!

Wonderful blog you have here but I was curious if you knew of any discussion boards that
cover the same topics talked about here? I'd really love to be a part of online community where I can get feedback from other knowledgeable individuals that share the same interest. If you have any recommendations, please let me know. Kudos!

Hey there just wanted to give you a quick heads up.
The words in your article seem to be running off the screen in Ie.
I'm not sure if this is a format issue or something to do with web browser compatibility but I figured I'd post to let you know.

The style and design look great though! Hope you get the issue
fixed soon. Cheers

Hey there! Would you mind if I share your blog with my twitter group?
There's a lot of folks that I think would really enjoy your content. Please let me know. Thanks