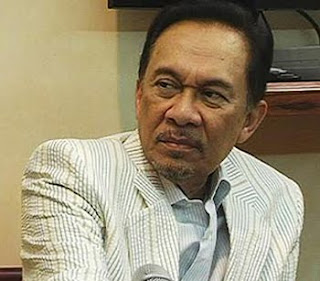 PKR de facto leader Anwar Ibrahim maintains that he was not the person in the sex video screen by the Datuk T group and says he might be charged with lodging a false police report.

“Knowing them, anything is possible. They can close up the Altantuya murder case, they can cover-up murder and rape case or whatever.

“We will deal with it. We will have to prepare our defence,” said Anwar, who is the Permatang Pauh MP.

Anwar was asked to respond to claims that he was positively identified as the person in the video by two US experts through a facial recognition analysis. He said that he had already expected the Datuk T group to receive a light sentence, insisting that one of the three, Rahim Thamby Chik, had met Prime Minister Najib Abdul Razak recently.
"I had expected they would use this court to cast fitnah (false accusation) against me and they would be let off with a light sentence," he said. "All this is pre-planned with (attorney-general) Abdul Gani (Patail) behind it and now we have the great (Muhammad) Shafee Abdullah," in it."

Today all three of the Datuk T trio comprising Rahim, businessperson Shazryl Eskay Abdullah and former Perkasa treasurer-general were fined a total of RM5500 after they pleaded guilty at the Kuala Lumpur magistrate's court today. Describing Shafee as “the lawyer from the VK Lingam era”, Anwar said he (Shafee) is using this as part of a continuing smear campaign against him.

When told that Shafee had told reporters that the findings of the American report showed a 99.99 percent possibility it was him, Anwar said yes, Shafee is an Umno crony who has enriched himself in the past.

“I think you know that.

“What is important is that I have declared my innocence. I am not the man in the video. They can use their experts from South Korea and America to say whatever they can say. This is nothing more than a vicious attack (on me) and a malicious campaign. Nothing beyond that.”

'This will not erode support for me'

Anwar said despite the prosecution of Datuk T today, he believes it will not erode support for him. He said the people are well aware enough over what has happened, how long it took for the prosecution to charge them in court despite the investigations made and the statements issued.

“All these moralist of Umno and again Rahim meeting Najib in Parliament. They think they can influence the people, maybe those who read the mainstream media only. But I am convinced Malaysians generally, would look at other issues.

He said today he talked or issued a statement about affordable housing (in light of the development of Sungai Besi) which he expects would not be carried. He expects the mainstream media will tomorrow splash about him being in the video and not carry such statements.

“You want me to talk about the morality of Najib or Rahim, come on.

“I will explain to my supporters as I am going to Grik tonight and will be in Kedah tomorrow night.

“Since when can we talk about morality regarding Eskay or Rahim or Shafee Abdullah,” he said.

Asked whether he will take action against Eskay for defaming him, Anwar replied, “Look what he has done, I lodged a police report and what happens? If I don't lodge a police report, they will say it's me. If I lodge...

“This is what you get if you find the instruments of government are used politically. What kind of system is this?" he asked.

He was talking to reporters after giving a talk on 'Social Market Economy - An Alternative for Malaysia' in Shah Alam.

Meanwhile, DAP parliamentary leader Lim Kit Siang lent his support to his Pakatan Rakyat colleague, slamming the charge as a “gross abuse of the process of the court, reducing the judicial process to a farce”.

Lim also poked holes into claims that US experts say that there was a 99.99 percent probability that the person in the video is Anwar.

“What is the probative value and credibility of such expert evidence when they are not challenged or tested by other expert testimonies, reducing them to the status of one-sided accounts not much better than mere hearsay,” he said.

He also demanded that the attorney-general explain why it took three months for the trio to be charge, and made no attempt to disguise his allusion that they are conspiring together with the ruling party of Umno.

He also asked if the delay was for the expert testimonies to be compiled and ready to be reported in court alleging that the person in the video is Anwar.