Mat Zain has also called for the setting-up of a tribunal to properly put the attorney-general on trial over the issue.

In a hard-hitting open letter to Prime Minister Najib Abdul Razak dated today, Mat Zain said the move to clear Gani (right) was expected, but the people were fed-up with the MACC being seen to be lying just to save the attorney general from being prosecuted.

This, he said, would cause the people to lose confidence in the MACC, resulting in what good the agency was doing being seen as a sandiwara (show).

"The committee chaired by Hadenan Abdul Jalil does not possess investigative or prosecution powers, nor any revisionary powers on any decision by the MACC or the prosecutors.

"I am of the view the announcement is made as a 'whitewash' exercise, directed to prevent any criminal action from being taken on Abdul Gani," he said.

Mat Zain was commenting on the announcement by the committee to clear Gani of any wrongdoing in his highly criticised haj trip. Hadenan, a former auditor-general, was quoted to have said the investigation found no proof of Abdul Gani's haj pilgrimage last year having been sponsored by others.

This comes after Abdul Gani had bared the details about his haj trip before all five MACC panels on Jan 4, where some members expressed satisfaction while some were expressly dissatisfied with the AG's reply.

It had come to a point that even the Bar Council had raised the affair and conduct of the attorney-general. 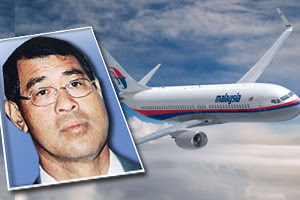 Calling for tribunal against AG

Mat Zain said the issue was whether it was wise for Gani, as attorney-general, to be seen together with Shahidan, who is being investigated by the MACC, since the result of the investigations would be sent to the AG's Chambers.

This is because the MACC is still investigating former Malaysia Airlines chairperson Tajudin Ramli following the discovery of new evidence over the RM8 billion losses made after the move to relocate MAS' cargo operations in Amsterdam and Frankfurt to a single hub in Hahn, Germany, as the single biggest loss suffered under him.

Mat Zain called for the formation of a tribunal appointed by the Yang di-Pertuan Agong on the advise of the prime minister to put the matter at rest. He said that this had been done before with former Lord President Salleh Abbas.

“With investigations looming on Tajudin, can the MACC or the AG's Chambers act independently and give a just decision into the on-going probe which had resulted in RM8 billion losses of the people's money and Tajudin is still under investigation?” he said, adding that while Hadenan had absolved Gani, he did not mention the status of Shahidan in MACC investigations or verify whether Shahidan and Abdul Gani's families had gone to Mecca together.

“This he said is a material fact in the investigation. If Hadenan hopes to recover the transaction record between Shahidan or Tajudin paying the amount it would be as if asking the obvious. Hadenan could be described as hiding a material fact in order to deceive the people as classified under the Penal Code,” he warned.

Mat Zain said the attorney-general should have good standing and high credibility with an unblemished record and protect the rights as mentioned in the constitution.

“Unfortunately Abdul Gani is prepared to be judged by anyone as long as the person is prepared to absolve him of any wrongdoing in public. If Abdul Gani cannot or dare not defend his rights and the special position of his post, how can the people expect him to be a protector of equality of the people within the scope of the federal constitution?” he said.

The former Kuala Lumpur CID chief said clearing the attorney-general should not be the role of the MACC.

“This is not the first time that the MACC has done it. The decision taken by the MACC is expected but the people will loathe the commission's actions further in lying and protecting Gani from facing criminal action,”said Mat Zain.

He also alleged that sometime between 1994 and 1996, Gani played a role in closing the cases or information regarding ministers or chief ministers being investigated for abuse of power and corruption and such conduct was certainly questionable.