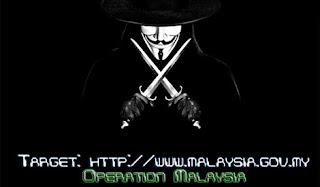 Since late yesterday, at least 10 websites of government agencies had been inaccessible due to an attack by hackers, in retaliation for the government's earlier decision to block file-sharing websites.

Last night the hackers, who call themselves Anonymous, published a list of 18 government websites which had been allegedly hit by DDoS (Distributed Denial-of-Service) attack or switched off by the website administrator.

A check by Malaysiakini at 7am today found that at least nine websites, including the flagship portal of Malaysia government MyGovernment (www.malaysia.gov.my), were still down.

Others were Sabah tourism, Asean connect, the Fire and Rescue Department, the Treasury, Parliament, Jobs Malaysia, the Information, Communication and Culture Ministry, and the National Sports Council. The official website of the Construction Industry Development Board Malaysia (CIDB) was also reported to have been defaced last night.

Acccording to netizens who published a screen capture of the hacked website, the original footer had been replaced with a statement protesting the earlier blockade of websites.

“Greetings, Malaysia, We have seen the censorship taken by the Malaysian government, blocking sites like The Pirate Bay, and WikiLeaks. Malaysia is one of the world's strictest governments, even blocking out movies, and television shows.

“These acts of censorship are inexcusable. You are taking away a basic human right. The Internet is here for freedom, without fear of government interference. Do not think that no one else notices,” read the statement.

It also said that the attack is a “sign, a warning, and an opportunity to listen to ideas above your own” and the hackers “are obligated to act fast and have no mercy”. 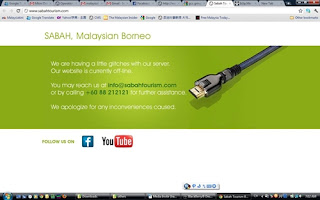 Last week, the Malaysian Communication and Multimedia Commission (MCMC) had announced that 10 websites including Pirate Bay and Megaupload had been blocked for infringing copyright laws.

Subsequently the hackers uploaded a short clip on video-sharing website YouTube, threatening to attack government websites from today in retaliation over the ban.

Yesterday, Information, Communications and Culture Minister Rais Yatim said the hackers “had got the wrong end of the stick”.

“They have misunderstood our good intentions. There is no cyber censorship in Malaysia unless crimes have been committed,” he said.

Amazing blog! Is your theme custom made or did you download it from somewhere?
A theme like yours with a few simple tweeks would really make my blog stand out.

Please let me know where you got your design. Kudos

Hello! Would you mind if I share your blog with my twitter group?
There's a lot of people that I think would really appreciate your content. Please let me know. Many thanks

Here is my website; armature
Also visit my homepage ; honeydew

Hello there! I know this is kinda off topic but I was wondering if you knew where I could locate a captcha plugin for my comment form?
I'm using the same blog platform as yours and I'm having
problems finding one? Thanks a lot!

Fantastic post but I was wondering if you could write a
litte more on this topic? I'd be very thankful if you could elaborate a little bit more. Many thanks!

Have you ever thought about including a little bit more than just your articles?
I mean, what you say is important and all. But think about
if you added some great images or video clips to give your
posts more, "pop"! Your content is excellent but with pics and videos, this site could undeniably be one of
the most beneficial in its niche. Great blog!

Howdy just wanted to give you a quick heads up. The
words in your article seem to be running off the screen in Firefox.
I'm not sure if this is a format issue or something to do with web browser compatibility but I figured I'd post to let you know.
The style and design look great though! Hope you get the problem solved soon.

Heya. I'm sorry to hassle you but I happened to run across your site and discovered you're using the exact same theme as me.
The only issue is on my blog, I'm unable to get the layout looking like yours. Would you mind e-mailing me at: rebbecachisolm@aol.com so I can get this figured out. By the way I have bookmarked your web-site: http://www.blogger.com/comment.g?blogID=1624275106440922314&postID=1150021566885653721 and will certainly be visiting often. Thankyou!

Feel free to surf to my site ... cheap

Hmm is anyone else encountering problems
with the images on this blog loading? I'm trying to find out if its a problem on my end or if it's the blog.

Any feedback would be greatly appreciated.

Hello are using Wordpress for your blog platform?
I'm new to the blog world but I'm trying to get started and set up my own.
Do you require any coding expertise to make your own blog?
Any help would be really appreciated!

My weblog :: trake
my webpage: www.mitindohouse.org

Hi just wanted to give you a quick heads up and let you know a few of the pictures aren't loading properly. I'm not sure why but
I think its a linking issue. I've tried it in two different internet browsers and both show the same outcome.

Hi there! This is my first visit to your blog!
We are a team of volunteers and starting a new project in a community
in the same niche. Your blog provided us beneficial information to work on.
You have done a wonderful job!