Anwar the bogeyman that has been flogged to death.... 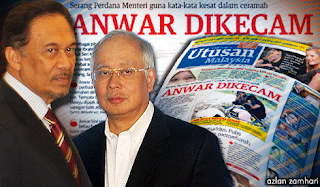 Yet for such a serious offence - as the pornography they peddled resounded throughout the nation - the three were fined a mere total of RM5,500 or a total 6 months jail by the judge. Malaysians are shaking their heads in disgust at the trivial fines imposed on the Datuk T trio.

Frankly, who will believe the reports are authentic. No one knows the background of these experts and what information or misinformation the police sent them. Even here, our pathologists can 'pakat' or collude with the police and give false autopsy reports. What more with unknown foreign experts!

But most of all, if the reports were really true that it was Anwar, there would be a trial already scheduled. Datuk T would proudly plead not guilty!

Shouldn't the Datuk T be punished all the more for leading the public in a smear campaign against Anwar? Shouldn’t the police and the Government of Malaysia(GOM) issue Anwar a public apology? And for putting UMNO in a bad light, shouldn’t these three UMNO members be sacked? Why is the GOM being put into such an embarrassing position by this shady Datuk T trio if UMNO is not involved? Why is the government and Perkasa cheering them on, if there is nothing shady about their inter-connections.

At the end of the day, Anwar is a bogeyman that has been flogged to death. Come on, sex fiends out there! Who can ever believe it was Anwar in the tape? How can a man be so crazed, let a lone an ambitous wanna-be-next PM of Malaysia? Maybe this is why Pakatan Rakyat is less worried this tme around. They can smell the overkill but silly UMNO can't - even though their own overkill is now killing them!

So, unless the government issues a public statement to completely disengage their involvement, the public will continue to believe that the GOM too is in cahoots with them. Again, Prime Minister Najib Razak has painted himself into his own corner. It is his own fault. Anyone with a half brain would be able to say STOP, this is the stupidest plot, 'don't even come near me with it!'

But no, Najib even paid millions for this drama. And by doing so, he reaffirmed his seat on a long Scorpene ride out from Putrajaya. His wife Rosmah needs only to open her eyes and look at who's supporting this sex video. And the supporters are Utusan, Star, TV3, and all the government-controlled media. In UMNO, these are all the well-known bootlickers and the usual suspects, including Rais Yatim, Puad Zarkashi, Khairy Jamaluddin and so on. Not to mention the other UMNO faction, Mahathir Mohamad and son Mukhriz.

The rest of the UMNO grassroots - if they trust you, they will answer, Gila! As for the Chinese, they will add on the word Babi! Not sure about the Indians though. I must check and make a report on this.

You see, being charged is one thing. But being convicted in court is another. It is a public disgrace. From now on, the trio should be banned from holding public office for at least five years. Imagine, the three of them got together, and formed a Datuk T trio. Surely, this must rank as one of the greatest and most costly melodrama created by a PM who depends on even more foolish spinners to strategize for him.

It is so silly that one of Rahim’s aide actually made a booking at Carcosa Seri Negara, while Shuaib paid the bill. They were sure they would be protected by the crooked arm of the BN government. And even after being found guilty by a court of law, they still say that they are doing it with 'sincerity' from the bottom of their hearts. It was their ultimate sacrifice for the sake of the country and national security.

They had invited a group of reporters and others to watch the sex video. After failing to convince the Public that the man in the video was Anwar, they went to a mosque all dressed up bullet proof vests to swear on the Koran, hoping that the Malays will believe in their story.

The Bullet Proof vests were to ensure that they would not be lynched in public by an angry crowd. And to further convince the public, one of them even made a feeble effort to say that he was actually at the scene of the video. If anyone thought that Ibrahim Ali was a clown, these three stooges actually beat Ibrahim Ali to the title of King of Clowns. 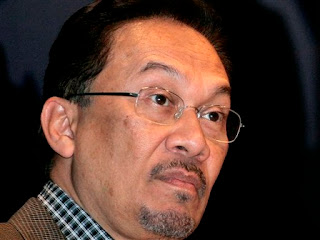 Sympathy pours in for Anwar

Such shameless characters are still walking around scot free, to plan and plot again, with the compliments of the BN government. Anwar meanwhile has alleged that the sex video by Datuk T Trio was a scandal hatched by Datuk Seri Najib and Rosmah.

Whether or not he got it right, the verdict by the Magistrate's Court has not in any way convinced the Public that the three stooges were acting alone. Someone is steering the wheel, just as someone was steering Saiful's wheel and Azizan's wheel. Was it the same people who drove Altantuya to the ground?

The Sex Video scandal is seen by many as a feeble campaign by the government to further discredit Anwar. In their desperation to cover their tracks with the Sodomy Trial starting to fall apart, many felt that the Sex Video scandal was conjured up to finish off Anwar politically.

You see, there are many conservative Malays, who cannot believe Anwar would sodomise a male. But they might believe he would have sex with a Chinese prostitute behind his wife's back. Yes, it is truly amazing how stupid and racist they think the Malays are. Even the prostitute, they took care to be sure came from the arch-enemy race - the Chinese.

Funny though, Najib can have the likes of Ziana and Altantuya, while Khairy has had to deny links with Maya. But poor Anwar has to go a prostitute recommended by the Datuk T. And also allowed it to be filmed by 4 cameras! This is the multi-million ringgit shenanigan paid for by the Najib regime. So smart is our PM. If he had gone to Bollywood, Chennai, he could have got a similar script for 10 rupees! And saved Malaysian taxpayers millions of ringgit.

BN is now forced to lick its wounds, as Anwar now has the advantage of public sympathy back on his side. The Opposition Leader has emerged stronger in the eyes of the Public. Sympathy is pouring in, especially from the 40 per cent fence-sitters who are still unsure of whom they should give their votes to.

For these fence-sitters, this is their call - Vote for Anyone other than BN!! Never allow Malaysia to go through such a phase of Darkness ever again.- Iskandar Dzulkarnain

i'm certainly agree with d writer's views n opinion...this is the work of uncivilised men who are scared of loosing power....don't u worry its will certainly comes...