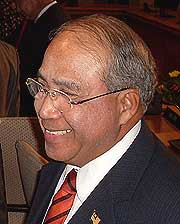 The Election Commission in its most scathing attack on the Coalition for Free and Fair Elections (Bersih 2.0) said today the NGO's planned July 9 rally was merely to build momentum for Pakatan Rakyat's bid for Putrajaya.

This is because the first Bersih rally in 2007 led to the political tsunami of 2008, EC deputy chairperson Wan Ahmad Wan Omar told a forum called "Bersih's demands - what is the Election Commission's explanation?" today.

"There was (a 2007) demonstration and as result, a momentum was built and in the 2008 election (the opposition) won big... now, the rumour is that snap polls will be called and history will be repeated.

"(They think) let us have Bersih 2.0 with more supporters, the momentum will grow and possibly win Putrajaya," he told an audience of about 500 people.

Therefore, Wan Ahmad appealed to Bersih chief S Ambiga to disassociate the NGO from political parties, and put this as a condition for further engagement between the commission and the NGO.

"If Bersih separates itself from political parties, then we can meet Bersih as a member of civil society as its agenda is for the good of all," Wan Ahmad said.

He said “Bersih today is no longer the Bersih (he) used to know” and that is has become kusut (a mess), so much so that Ambiga did not realise that she was being used as a political tool.

“So many people want to join the bandwagon with so many issues… don't blame the police, they have a bigger responsibility. Sane people will remove themselves from this group and let the political party go ahead and take the risk (of persecution),” he said.

On the demand for the use of indelible ink, on which civil society “harassed and put the commission was under pressure” to adopt in 2008, Wan Ahmad said the move was “regressive” as the only countries in the world that use it are the less developed countries of Africa and Indonesia.

In an immediate response, Bersih 2.0 chief S Ambiga swatted aside the EC's accusations, saying that it is the commission that bears the burden of proving it is impartial.

“The EC has to be very careful what they say, because they may accuse me of many things but the constitution requires them to be independent.

“Is what they are saying; does it show they are independent? That's all, and I ask the public to judge for themselves,” she said.

Amazing! This blog looks just like my old one! It's on a completely different subject but it has pretty much the same page layout and design. Great choice of colors!

Here is my weblog :: concrete
Also visit my web-site ... wireless

Great blog! Is your theme custom made or did
you download it from somewhere? A design like yours with a few simple tweeks would really make my
blog jump out. Please let me know where you got your design.
Thanks a lot

My coder is trying to convince me to move to .

net from PHP. I have always disliked the idea because of
the expenses. But he's tryiong none the less. I've been using
Movable-type on various websites for about a year and am anxious about switching to another platform.
I have heard very good things about blogengine.net. Is there a way I can import all
my wordpress posts into it? Any kind of help would be greatly appreciated!


Check out my homepage; lapdog
Look into my blog post :: nasturtium

I was wondering if you ever thought of changing the structure of your
blog? Its very well written; I love what youve got to say.
But maybe you could a little more in the way of content so
people could connect with it better. Youve got an awful lot of text for only having one or 2 images.
Maybe you could space it out better?

Whoa! This blog looks exactly like my old one! It's on a totally different topic but it has pretty much the same layout and design. Wonderful choice of colors!

I'm curious to find out what blog system you are working with? I'm experiencing some minor security problems with
my latest site and I would like to find something more safe.
Do you have any recommendations?

Howdy! I realize this is sort of off-topic however I
had to ask. Does running a well-established blog like yours take a large amount of work?

I am completely new to running a blog but I do write in my diary everyday.
I'd like to start a blog so I can share my experience and views online. Please let me know if you have any suggestions or tips for brand new aspiring blog owners. Thankyou!

Awesome blog! Is your theme custom made or did you download it from somewhere?
A theme like yours with a few simple tweeks would really make my blog shine.
Please let me know where you got your design. Appreciate it