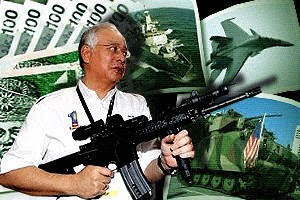 Opposition parliamentarians demanded Prime Minister Najib Abdul Razak to explain his 'threat of calamity' if his party loses in the next general election.

Mahfuz Omar (PAS-Pokok Sena) reacting to the possibility of a coup d'état if the premier and BN fail to retain the government, insisted Najib must assure parliamentary democracy will be upheld.

"His statement is worrying. It sounds like a threat and it is dangerous for our democratic institutions," he said.

"It is as though he is lacking confidence and issues a threat, but it also looks like he is planning to call for an election soon," said Mahfuz.

The Star daily had reported the prime minister saying that "the people should not take any risk that may make them regret later" warning voters that "if BN cannot win, no others can". Najib reasoned that Pakatan's lack of a common ideology, unlike BN, is a clear indication that its leaders are not capable in leading the country.

"Will there be rioting and disorder if BN is fated to lose? Will Najib, who was once defence minister, use the military to take over the country forcefully?" he asked.

Khalid Samad (PAS-Shah Alam), who was also present at the press conference in Parliament lobby, added that if a coup takes place it would not be a loss to the opposition but a "slap in the face" for the public.

"I want a clear and decisive statement that he (Najib) will surrender his powers if he loses. We want a direct response not something twisted," said Khalid.