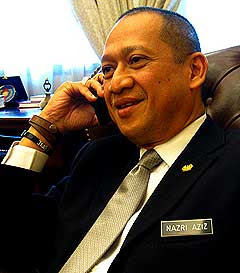 Commenting on legal threats by Bukit Gelugor MP Karpal Singh, Nazri, who is both de facto law minister and minister in charge of parliamentary affairs, said that the courts cannot interfere with Dewan Rakyat proceedings.

“This is a crazy thing to do and I believe that it will be rejected by the courts due to parliamentary supremacy,” he told reporters at the Parliament lobby today.

Nazri that there had already been judgments which clearly states that the judiciary has no jurisdiction over Parliament.

“There is the sovereignty of Parliament and supremacy of Parliament. They have got cow dung in their heads. “I assure you that if they take it to court it will be kicked out. What law did Karpal (Singh) read? He is a third-class lawyer,” said Nazri with a laugh.

Karpal had warned that legal action would be taken against Pandikar for abusing his powers in relations to the passing of a motion to suspend Opposition Leader Anwar Ibrahim and three others for six months.

Karpal Singh said, “We don’t accept the motion. That’s the reason why we walked out. We may take it to court. There is precedence in the case of Gobind Singh where we took the Speaker, Pandikar Amin, to court.

“The court has ruled that in certain circumstances, especially when the rule of natural justice is not complied, then the court has the jurisdiction. We will take it to court. The action of the Speaker is so blatant that it cannot in anyway be defended. We want a judicial ruling on that so we can’t let him get away with this. We don’t want this to become a precedence in future,” 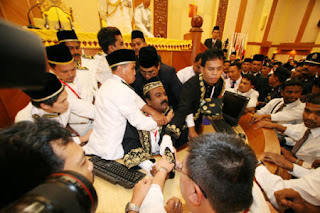 Courts cannot interfere with Dewan Rakyat proceedings. But it can interfere in Perak State assembly proceeding.

The proceeding in Perak went through the court simply because BN wanted it so that BN remain in power and the courts granted BN's wishes.

Now Nazri is telling that the case will be thrown away. So another dictated BN's decision in the making. Another ketuanan UMNO show off.

The rakyat know the constitution is clear but then it was made unclear by BN's actions in Perak. Why the double standards.....