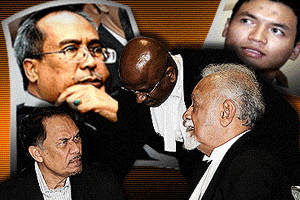 Zabidin said that based on the court transcript which he had read, there was no bias on his part.

"I think a reasonable man who have read these words in its proper context would not have the impression that there was a real danger of bias. Hence, the application is dismissed."

The application was made following allegation that Zabidin had threatened lead counsel Karpal Singh with contempt after the defence lawyer informed the court he wanted to recuse the judge for not abiding a Supreme Court decision involving the defence's bid to obtain the proforma form referred to by witness Dr Siew Sheue Feng.

Although Zabidin withdrew the remark and later ordered Hospital Kuala Lumpur's Siew to hand over the proforma form used during the medical examination of complainant Mohd Saiful Bukhari Azlan, Karpal had pressed on with the recusal bid, arguing that there was a real danger of bias being committed by the judge.

This was the second attempt by the defence to disqualify the judge - the first was after the judge failed to issue a warning to Umno-owned Utusan Malaysia's for its allegedly inaccurate coverage of the trial earlier this year. Lead prosecutor solicitor-general II Mohd Yusof Zainal Abiden was not in court today after his mishap of fracturing a leg after reportedly trying to save his cat from falling into a drain.

Karpal applies for a stay of proceeding pending appeal.