Corruption in 1Malaysia is on the rise.... 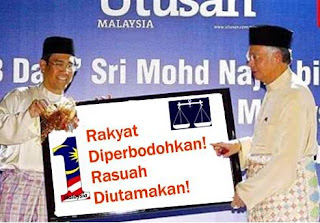 Close to half of Malaysians surveyed in a global corruption study feel that corruption is on the rise in the country. According to Transparency International's Global Corruption Barometer 2010, 46 percent of 1,000 people surveyed believe corruption has been higher this year than last year. Another 19 percent feel it has dropped, while 35 percent say that there has been no difference.

However, market research agency TNS Malaysia said in the face-to-face interviews conducted from June 28 to July 26 this year, only nine percent, or 90, admitted to have given bribes in the past 12 months. The 90 said that they had bribed the police or people working in registration and permit processing, land, medical, utilities, state education or customs offices, and even the judiciary.

This puts Malaysia in the seventh spot among the 22 Asia Pacific countries surveyed, with South Korea leading the pack at only 2 percent of the people interviewed there admitting to having given bribes in the past one year.

"Also, procurement is not as open as it should be and we often hear of this or that project given to someone at three times higher than what it should cost," he said when unveiling the report to the Malaysian media this morning.

Low added that charging high profile politicians with graft must not be done as a political gimmick, for failing to get a conviction would reflect badly in the next survey.

Police most affected by corruption

Next came the public and private sectors, both scoring 3.0, the same as the judiciary. And NGOs are at 2.9, followed by the media at 2.7, the education sector 2.4, armed forces 2.3 and religious bodies were believed to be least affected at 2.4.