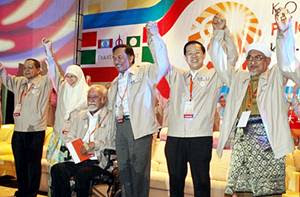 The Pakatan Rakyat convention in Penang sent an unmistakable and chilling signal to arch rivals - Prime Minister Najib Razak and the Umno-BN coalition. Despite a roller coaster journey since sweeping to power in the 2008 general election, Pakatan has not been diminished by the enmity and malice unleashed by its political opponents, but has been able to mature and grow stronger in the process.

"You name it, whatever problems, whatever hardship or stone or rock that the Umno-BN could find, they have thrown it at us. But we are committed to an agenda of change and that needs the removal of the current federal government," Opposition Leader and Pakatan de-facto head Anwar Ibrahim told Malaysia Chronicle at the sidelines of the congress.

Pakatan delegates and other members of the public who wanted to meet their 'reformasi' heroes were spoiled for choice. DAP secretary-general Lim Guan Eng, who is also Penang Chief Minister, played host to the 2,000-strong crowd at the convention.

In a rousing opening address, Guan Eng warned Prime Minister Najib Razak's Umno party not to 'hijack' the federal constitution and misinterpret the controversial Article 153 to divide the ethnic groups in the country.

"Somehow Umno always fails to mention that Article 153 also states that the legitimate interests of other communities must also be protected,” Guan Eng said.

“Umno will always try to play up the relationship between PAS and DAP. They want to politicise this. They will use the 3Rs — Race, religion and ‘Raja’ (the Rulers) to try and drive a wedge between us."

Guan Eng also unveiled a ten-point document to be signed by all the top Pakatan leaders and which is set to become the coalition's preliminary manifesto in the coming general election. The resolutions outline in detail the changes Pakatan will introduce within the first 100 days of its taking over Putrajaya if it wins the next general election expected to be held early next year.

1. A restructure of institutions including the Elections Commission (EC), the Malaysian Anti-Corruption Commission (MACC), the Attorney-General’s Chambers and the Royal Malaysian Police. During a debate on the policy framework, DAP’s Anthony Loke said PR bring the MACC under the purview of Parliament.

2. A repeal of the Internal Security Act (ISA)

3. Instruct Khazanah Berhad, Employees’ Provident Fund (EPF) and other government bodies to take over highway assets from the concessionaires in order to abolish the toll system.

5. Acknowledging the role and sacrifices of civil servants by studying the current pay schemes and increasing the incentives for teachers by RM500 a month

7. Offering free wireless Internet access to those in urban and semi-urban areas

8. Cancelling Felda Plantations and opening up its farms to second- and third generation Felda settlers.

9. Increasing oil royalty payments to Sabah, Sarawak, Terengganu and Kelantan to 20 per cent from 5 per cent currently.

10. Formation of a Royal Commission to solve the problem of illegal immigrants and citizenship issues in Sabah and Sarawak.