Thousands at PR rally to hear about Kuan Yew,Dr M,Najib and Altantuya... 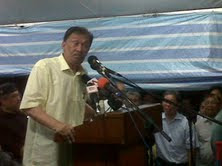 They were not disappointed. A star-studded line-up greeted them with speeches that soon had them cheering and clapping. Pakatan leaders such as Tan Tee Kwong, Tian Chua, Khalid Samad,Teresa Kok and Shamsul Iskandar Akin renewed the coalition's promises of change and reform.

The multi-racial crowd was also clearly eager to hear Pakatan's explanation of the accusation made by Singapore's Lee Kuan Yew against Anwar. They wanted to know why the elder statesman would make such a remark on WikiLeaks and were also keen to hear Anwar talk about former premier Mahathir Mohamad, who has insisted Kuan Yew's facts are right.

"Do you think I'm dumb to go into a trap knowing it is a trap? Don't challenge me too much! I will open up the murders - committed and covered up!," Anwar told the crowd, which roared back their support. "WikiLeaks, do you have technical evidence? If you do, bring Lee Kuan Yew to court. Whether you think I did it or not, that's none of my business. You have any video recording or doctors' notes, produce them at court." 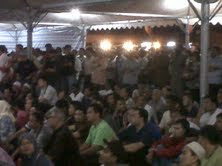 Most of the Pakatan's side of the story has been blacked out in the mainstream media which only carried news that Kuan Yew had told Australian officials that he believed Anwar was framed, but he had also committed sodomy. Anwar has repeatedly denied these charges and his lawyers have earlier today announced he will be suing Mahathir. It is likely Anwar's defense team may try to subpoena Kuan Yew to testify in his Sodomy II trial.

"Lee Kuan Yew is afraid that Singaporeans will seek reformasi as the party in Singapore is the same like Umno which has never changed. We are not afraid, confused, or shocked with this allegation," Tian told the crowd.

But most sought-after were the Najib tidbits

But above all, the crowd appeared most eager to hear the latest tidbits about Prime Minister Najib Razak, who was also criticized by Singapore officials. WikiLeaks had also exposed these comments but the mainstream press has again blacked out this news.

"If Utusan published about WikiLeaks on Sodomy, why did it not publish about Najib's link to the Altantuya murder which was also said by the same Singapore intelligence. We want Singapore to bring the evidence about the sodomy and the murder of Altantuya to court. I want to propose to the Dewan Rakyat to debate on the issue of Wikileaks - sodomy and Altantuya murder and expose all the evidences to the public. Dr M responded for sodomy but what about Altantuya's murder and the link to the PM?" said Tian.

Top Singapore diplomats such as Tommy Koh, Peter Ho and Bilahari Kausikan had in comments to their U.S. counterparts called Najib an "opportunist", saying his involvement in the Altantuya murder was tarnishing Malaysia. They also said Malaysia was on a decline due to "incompetent politicians". Najib had tried to keep a lid on these explosive comments by asking Malaysians to ignore the Singaporean criticism. But tremendous pressure from Malay groups have forced him to issue a letter of protest to the Singapore High Commission today.

"Now, it's not me who said Najib is involved in the Altantuya murder but WikiLeaks. WikiLeaks is the one who says our prime minister in involved in a murder," said Anwar. 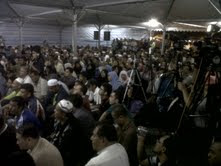 Anwar also told the crowd that if Parliament suspended him for linking Najib's 1Malaysia with APCO, a U.S. based firm with Zionist links, he would tour the country and speak to the people.

Police had earlier set up road blocks nearby to Taman Melati but decided to allow the ceramah to carry on as a permit had already been obtained. Meanwhile, PKR Youth Chief Shamsul Iskandar Akin challenged Najib to dissolve Parliament and hold snap general elections if he truly believed Malaysians were behind the Umno-BN.

Political academics have been reported as saying BN would still win the next general election. However, they were not sure if it could regain the two-thirds parliamentary majority lost to the Pakatan in 2008. They warned that a Third Force, promoted by several prominent bloggers and whom many Malaysians believe are actually funded by Umno, may further undermine the Pakatan's chances.

Teresa also lambasted the Selangor Umno for spreading lies about the Pakatan state government. "The federal government alleged that Selangor was suffering a drop in investment. From January to September, we drew RM6.53 bil, the highest in Malaysia whereas Johor - despite all of BN's Iskandar corridor efforts only pulled in RM3.57 bil," she told the crowd. She also explained the Selangor administration's need to regain control of the state's water assets including revoking the existing monopoly granted to Umno crony firm SYABAS, which currently has sole rights over water distribution in the state. "If we don't take over SYABAS, the price of water tariff would increase," said Teresa.