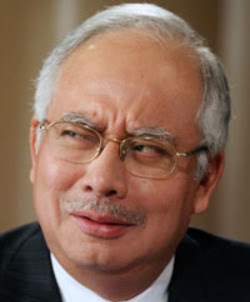 Umno president Najib Razak tonight announced that the party polls next year will be postponed by 18 months in a bid to strengthen the party, confirming that general elections will be held either next year or 2012. "The supreme council has unanimously decided this for the party elections at division and central leadership levels.

Najib,said that the decision to postpone the polls was made to avoid the party from entering "a political struggle which could lead to clashes within the party" next year. "We believe we can control this, but we don't want to be in a high pressure situation which had happened to other political parties," he said, perhaps referring to the problems afflicting the opposition PKR in its recent direct elections. "We want the party to focus on the stengthening and improving of Umno based on a new political model." Umno last held its triennial party election last year and the next polls are due in 2011.

When asked whether the postponement had anything to do with the forthcoming 13th general election, Najib who is also Umno president since winning the post, unopposed for the 2008-2011 period, said it was nothing new. "To my knowledge, such a decision has made three or four times before and there was no problem or was it something unusual," he said.

The first time an Umno supreme council election was postponed came about in 1999, when it was delayed until May 2000 to concentrate on the 1999 general election. It was also put off in 2008 and the polls were held in March 2009 instead.

Najib's announcement increases speculation over imminent snap polls next year, but when asked this, the premier kept his cards close to his chest.

If UMNO is a credible party it will carry on with the party polls come what may.....