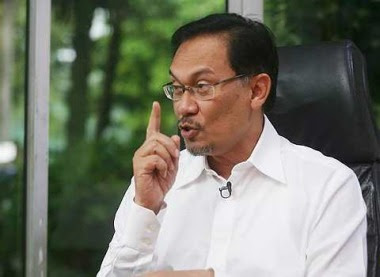 Anwar Ibrahim said that the slew of “good news” coming from BN recently were merely an attempt to win votes ahead of polls and not address the core problems faced by the country.

He was referring to the authorities decision to charge former Selangor Menteri Besar Dr Mohd Khir Toyo for graft, the resignation of MIC president S Samy Vellu and the announcement that the Unified Examination Certificate (UEC) will be recognised by teacher training colleges.

These three events took place yesterday. For Anwar, they were an attempt by BN to address grouses of the Malay, Chinese and Indian communities ahead of the 13th general elections, rumoured to be held early next year.

“The difference with Pakatan Rakyat is, we consider these to be policies and will cannot be given as piecemeal (to different groups) to lull them (into supporting us).

“For example, there are many cases of corruption but they were put aside. But only one case (saw action taken). Eric Cheah was arrested over the Perwaja Scandal before the last general elections.“It is actions like these that does not bringing about real change,” he told reporters after officiating a seminar on Maal Hijrah.

Anwar said the government should address all issues affecting the rakyat, regardless of whether the problems involve the Malays, Chinese or Indians, or the land issues affecting the indigenous communities of Sabah and Sarawak. He promised that under a Pakatan administration, the rule of law would be enforced, corruption will be rooted out and the judiciary would be made independent in order to bring change to the country.

Anwar said that currently, the criminal justice system practices selective prosecution and this cannot be allowed to continue.

“Some people can be gullible, probably swayed by the prosecution (of Mohd Khir), but we will remind them, that before the election there would be one prosecution involving a VIP, and there would be some concession to the Chinese, Malays or Indians. “This is Umno and BN's pattern. They would give some leeway to the MCA to say certain things but the essence is, it is Ketuanan Melayu (Malay supremacy) and not Ketuanan Rakyat (People's supremacy), not rule of law and distributive justice,” he said.

Meanwhile, Penang CM,Lim said despite all the gimmicks by BN come election time, the BN cannot answer the most basic question of why it rejects Ketuanan Rakyat.

“Instead it upholds Ketuanan Melayu by Umno, Ketuanan Cina by MCA and Ketuanan India by MIC... I do not know what Gerakan holds... this is the basic question,” he said during the same press conference.

“Why can't they (BN) accept Ketuanan Rakyat for all. This the most important question, as long as they do not answer this, these gimmicks cannot instil confidence in the people,” he added.