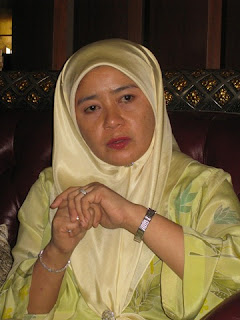 Land on which the Kampung Melayu Pekan Rawang surau is located was sold to private hands by the Selangor government in 2002, then controlled by BN.
The surau is now slated for demolition, triggering protests.
Selangor MenteriBesar Khalid Ibrahim's political secretary Faekah Husin (left) said the plot was held by SAP Holdings Sdn Bhd, then held by state investment arm Kumpulan Darul Ehsan Bhd (KDEB).
In 2002, KDEB released its shares in SAP Holdings Bhd to private ownership. The same year, the state government approved a joint-venture project on the land between SAP Holdings and another company Mahamus Sdn Bhd.
In a statement, Faekah said the facts run contrary to claims by Umno leaders who are championing the residents' cause to campaign for the surau to be preserved.
She singled out Zainal Abidin Sakom(right) as among the Umno leaders involved. 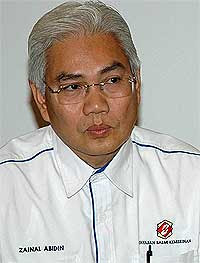 MB Selangor. call all the villagers to perform 'solat hajat' for the truth to prevail and the rascals be punished immediately.