Police fired tear gas and use water cannons to break up a protest by an estimated 4,200 people on the Selangor water issues in the vicinity of the National Mosque today.The stand-off between the police, numbering about 600, and the protesters lasted for more than an hour after the police moved in to force the protesters to retreat. Kuala Lumpur police chief DCP Datuk Zulkifli Abdullah said 48 protesters were arrested when they defied police orders to disperse.

Earlier, police were believed to have allowed Selangor Mentri Besar Tan Sri Abdul Khalid Ibrahim and a few state government officials to pass through the police line and head to Istana Negara to hand over a memorandum, with 250,000 signatures, on the water issues to the Yang di-Pertuan Agong. Khalid handed over the memorandum to a palace official. 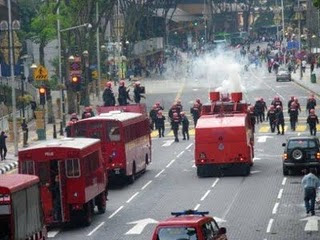 The protesters, many of them wearing red shirts, started gathering at the mosque compound from 11am onwards despite police efforts to prevent the march from going ahead by putting up roadblocks across the city.

At KL Sentral, police arrested Parti Socialis Malaysia (PSM) chairman and Kota Damansara assemblyman Dr Nasir Hashim, party secretary-general S. Arulchelvam, and Shah Alam city councillor A. Sivarajan as they were about to make their way to the march. They were taken to the Cheras police station before being released and allowed to proceed to the mosque.

At about 1.30pm, several Selangor state exco members, including Elizabeth Wong and Ronnie Liu, and Pakatan MPs Charles Santiago and Azmin Ali, had made their way to the starting point of the march, despite the heavy police presence. 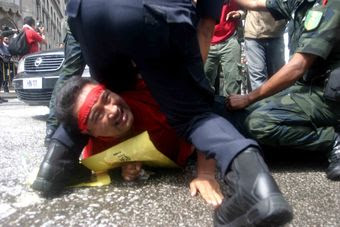 Also present were some graduates from Unisel and members of the student movement Solidariti Mahasiswa. Abdul Khalid showed up at 1.45pm and the crowd began marching to the shouts of "Hidup Rakyat". As the police cordon tightened around the group, Abdul Khalid and a small delegation were allowed by the police to head to Istana Negara. But things began to get unruly at the vicinity of the mosque and the KTM building, forcing the police to fire tear gas at the protesters after their orders to disperse were ignored. The water cannons were brought when the protesters regrouped. Several protesters were seen roughing up a police officer.

Those arrested were taken away in two police trucks before a deal was struck between some PKR leaders and the police to allow the crowd to disperse peacefully. State executive councillor Yaakob Sapari told the crowd that the "objective to submit the memorandum to the Ruler has been achieved" and asked them to disperse slowly.

"The police have promised to release all the protesters after everyone disperses peacefully, batch by batch. They will not disturb us, so let’s all leave in peace," he said to the crowd, who shouted back to "ask the police to leave first". By about 4.20pm, the group had dispersed and there were only a handful of people left. 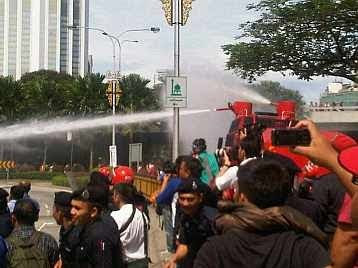 The memorandum submitted to the palace urged the Yang di-Pertuan Agong to remind the federal government that the aim of the Water Services Industry Act 2006 was to return the rights of water to the people and to restore the state government’s powers over the water issues.

At a press conference at the city police headquarters later, Zulkifli said police estimated the crowd to number 4,200. He said at least 600 policemen, including members of the Light Strike Force and Federal Reserve Unit, led by Kuala Lumpur deputy police chief SAC Datuk Amar Singh and Dang Wangi police chief ACP Mohd Zulkarnain Abdullah, were deployed to control the crowd. The roads leading to the palace were also closed to traffic and traffic jams were reported in several parts of the city.

Zulkifli expressed his disappointment over the protest as the demonstrators had agreed to disperse peacefully after Abdul Khalid had left for the palace to hand over the memorandum.

"We tried to help facilitate the handing over of the memorandum by providing police escorts for Abdul Khalid. Even Abdul Khalid thanked us for this in his speech and agreed the demonstrators should leave peacefully but the protesters broke their promise and tried to march towards the palace. We were left with no choice to stop them with the the water cannons and tear gas," he said. 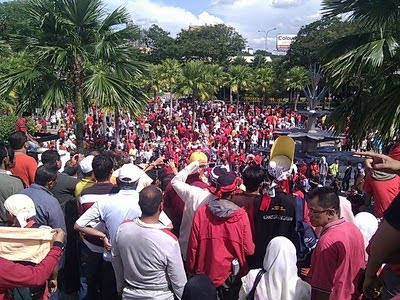 On a separate protest at about the same time against the Selangor government by another group called Gabungan Anti Penyelewengan Selangor (GAPS) at Stadium Negara about 1km away, Zulkifli said the group, comprising about 150, had also planned to march to the palace to hand over a memorandum.

When police advised them not to the march to the palace but to send a representative to hand over the memorandum instead, the group complied with the request, he said.

You got to be there to see the crowd. Sitting behind your computer and making comments serves no purpose!!