The sad parody of Gobalakrishnan.... 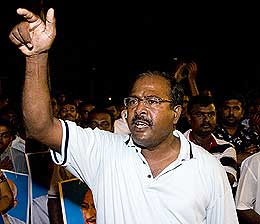 Former British prime minister Harold Wilson famously quipped that a week is a long time in politics. What more the month and a half since the time Gobala, as he is commonly called by friends, achieved an apotheosis of sorts in his relationship with Anwar.

That was Nov 11 when at the Pulai Springs Resort in Johor, Gobala told several score delegates from the state's PKR divisions, in the presence of Anwar and Azmin Ali, that though he supported Zaid Ibrahim for deputy president of the party, he drew the line on attacks by the latter on Anwar.

While candidly admitting he had supported Zaid in the contest for the party No 2 post, Gobala reaffirmed to the crowd his belief that Anwar's leadership was necessary to deliver the political reforms the country so badly needed. Hence he was not going to join Zaid who had just withdrawn from the race and was in party-quitting mode.

Someone with doubts about the wisdom of the PKR elections - as too radical a step in advance of the party's congealing on ideology and organisation - would have come away with qualms quieted, having watched Gobala handle the issue of intra-party rivalry and dissent. Here was a competitor - Gobala was then running a creditable fifth in the race for four vice-presidential slots - who knew how to keep rivalry in PKR within cohesion-forging limits.

The way Gobala spoke of his regard for Anwar gave the lie to the insult hurled at him by Sabah Umno MP, Lajim Ukin, who in Parliament last year called Gobala Anwar's toady, using language decidedly unparliamentary. Gobala is no one's flunkey, not yet.

More than sour grapes at being ignored

Gobala had expected to be named to one of four appointed veep positions in PKR following his failure to get elected to the four vice presidential slots that were up for direct election. Selangor state exco member Xavier Jeyakumar eventually out-polled Gobala in the vote and had expected to be named, but both he and Gobala were not selected for the appointed veep slot reserved for Indians. Instead human rights lawyer, N Surendran, was preferred. Dentist Xavier is rankled by the slight but does his grousing in private. Gobala, who is without tertiary qualifications, has gone public with his fury, at being ignored.

There are grounds to think that the recent PKR elections were marred by irregularities, but Gobala hasn't confined his misgivings to the poll results only. He now speaks all manner of ill against Anwar, targeting Surendren in turn. Gobala's bile is no longer a matter of sour grapes at being ignored for vice-president of the party; he now questions Anwar's sincerity in wanting to help poor Indian Malaysians get ahead in life.

In fact, Gobala sounds very much like S Nallakaruppan, like Gobala an ex-MIC youth leader, who had made common cause with Anwar before angrily departing PKR in 2007 after what he saw as Anwar's insincerity in not approving his bid for vice-resident in the party polls that year. Nalla, as he is commonly referred to, went on to claim that Anwar affected to care for the plight of Indian Malaysians but did not really bother.

At the time when Nalla made those criticisms of Anwar, Gobala rose in defence of Anwar, publicly recalling the times when Nalla told him of Anwar's telephone chats with Nalla on the eve of Budget day. Anwar, the finance minister then (1993-98), would inform Nalla of measures in the Budget reckoned to be helpful to Indian entrepreneurs. Gobala's reminiscences were in apparent refutation of Nalla's strictures that Anwar was only good at feigning concern for the economic conditions of Indian Malaysians.

Now Gobala is parodying the very critic of Anwar he took exception to in 2007. The end of that year turned out to be pretty good for Gobala's relationship with Anwar. It was he who apprised Anwar of Hindraf's penetration of 18 major temples in Peninsula Malaysia that led to the informal movement's success at organising the massive demonstration of Nov 25, 2007. Based on Gobala's intelligence gathering, Anwar was able to leverage on the protest to gain for the opposition coalition he led the advantage at the general election of the following March.

The upshot: a hitherto invincible BN was denied their two-thirds parliamentary majority in addition to conceding four states to the opposition which maintained control of Kelantan.
It was a political tour de force and Gobala played a crucial hand in it. Now that's all receding into insignificance as Gobala abandons the quiet discretion of his crucial bit-playing roles in PKR to join the ever enlarging caravan of one-time admirers of Anwar who have turned into detractors.- Terence Netto.