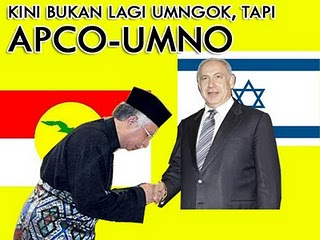 Opposition leader Anwar Ibrahim today accused Parliament's rights and privileges committee of pushing for his suspension without hearing his defence on his allegations about US-based consultancy Apco.

Bukit Gelugor MP Karpal Singh, who is a member of the powerful committee, said today's meeting was called without any fixed agenda.Karpal said the committee members were given a letter from Apco, dated Aug 19, at the meeting.

"Suddenly, Muar MP Razali Ibrahim moved a motion that the matter be heard and the motion was seconded by Alor Gajah MP Dr Fong Chan Onn," he said.

"R Sivarasa (Subang Jaya MP) was also there, and we protested against the hearing of the matter. I questioned the hurry, and Razali asked, 'why not?'," added Karpal.

Following this, Karpal said that he and Sivarasa walked out of the meeting in protest.

"The meeting went on without our presence," he said. Karpal and Sivarasa said they had no idea what transpired at the meeting after they left.

Anwar, who was also present at the press conference, described the process as "totally outrageous". 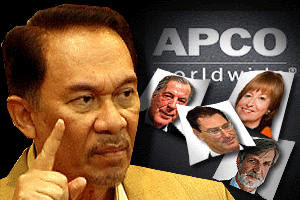 "When I was referred to the committee, the speaker had promised a proper hearing where documents will be presented, and I will be able to defend myself," he said.

"However, this is not being done. This is unfair, and a black mark in Parliament's history," he added.

He showed the Parliament Hansard dated April 22, where Ipoh Timor MP Lim Kit Siang had raised the issue, and the speaker Pandikar Amin Mulia's reply which stated the rights and privileges committee will call whomever witness to testify and important documents will be tabled.

“We will call anyone who is needed and documents wil be tabled. The committee will then make its recommendation and decide on the proper punishment,” Pandikar was quoted as saying.

Anwar's lawyer, Ambiga Sreenevasam, said the Parliament had acted against the rule of natural justice by having the rights and privileges committee meet without calling Anwar. “This has never happened before in courts where a person is at least given his right to defend himself, but this was not done,” she said.

Anwar said if he was to be called he had prepared his defence, showing the file which he had with him.

“I have all the evidence to rebut all the allegations and denial but I was not given the right to defend myself.

“They are merely taking the words from a document (Apco) and not from other witnesses including me. This is truly unfair and undemocratic and violates the rules of natural justice,” he said.

Despite the adversities he faced, the Permatang Pauh MP is prepared to face the music when parliament resumes on Monday.

Committee had made a decision

When contacted later, Pandikar Amin, who chaired today's meeting, said that the committee had made a decision. However, he declined to reveal its decision and said the matter will be finalised on Wednesday. The decision will then be tabled to Parliament for further action.

Anwar was also asked whether such actions directed to prevent him from coming to Parliament are signs that the general election is approaching, and to this Karpal responded he believed it is so.

“Such a move done by the committee is unwarranted,” he said, adding that despite being faced with the prospect of suspension Anwar was still eligible to contest.

“This does not affect his rights but it will only hinder Anwar's presence in Parliament if he is suspended,” he said.