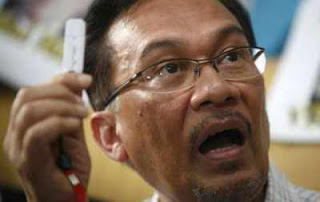 Opposition leader Anwar Ibrahim Monday moved to stem the impact on his sodomy trial of US cables released by WikiLeaks claiming he had sex with a male aide in a honey trap set by enemies. Anwar's lawyer Sankara Nair told AFP he will file a complaint with the court hearing Anwar's sodomy case over articles in the local media which could affect the former deputy premier's ongoing trial.

"Clearly it's a case of sub-judice, it's hearsay and conjecture, intelligence reports are not based on facts generally, they are based on rumours and I have served in the security services before so I know that the last thing you do is to trust such a report," said Nair. "The judge must call up the newspapers and ask them to explain why they wrote the piece and to show their proof.

"If they can't do this then they will be cited for contempt," he added. "If this is not sinister then it is totally unethical reporting. I have advised my client to file a lawsuit against these papers as well."

The leaked US state department cables from November 2008 were given to Australia's Fairfax media group, which reported Sunday the Australian and Singapore intelligence agencies' assessment of Anwar's ongoing case.

"The Australians said that Singapore's intelligence services and (former prime minister) Lee Kuan Yew have told ONA (Office of National Assessments) in their exchanges that opposition leader Anwar 'did indeed commit the acts for which he is currently indicted'," the cable read. "ONA assessed, and their Singapore counterparts concurred, 'it was a set-up job and he probably knew that, but walked into it anyway'," according to the cable.

Anwar, 63, has vehemently denied sodomising his aide, 25-year-old Mohamad Saiful Bukhari Azlan, claiming he was the victim of a political conspiracy. He faces 20 years in prison if found guilty of sodomy, a serious crime in Malaysia. Human Rights Watch has urged Malaysia to drop the charges against Anwar, condemning the case as a "charade of justice".

Whether there are any truth to the WikiLeaks expose,the question we are still asking is, why the prosecution fight tooth and nail to deny Anwar the fundamental rights,as mandated by Malaysian laws? Among others to have access to the basic documents needed for his defence, such as the complainant's police statement, original medical reports and medical notes, video recordings to the concerned condominium, etc?