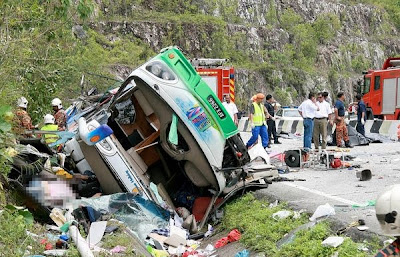 A bus carrying Thai tourists crashed and overturned today as it came down from Cameron Highlands, killing 27 people and injuring 10 in what is believed to be the worst road accident in Malaysian history.

Twenty-two of them died on the spot in the accident at Km15 of the Cameron Highlands-Simpang Pulai Road after the double-decker tour bus crashed onto the divider, went across to the opposite lane and overturned in a ditch, said Perak Deputy Chief Police Officer Datuk Zakaria Yusof.

Four people died as they were being rushed to hospital and one person died at the Raja Permaisuri Bainun Hospital here, he told reporters at the scene. Three of those killed were Malaysians, he said, adding that one of them was the bus driver Omar Shahidan, 48, another a tour guide of Siamese descent Soontorn a/l Kian, 38, and the third a yet-to-be-identified co-driver. Fifteen of the dead were women. 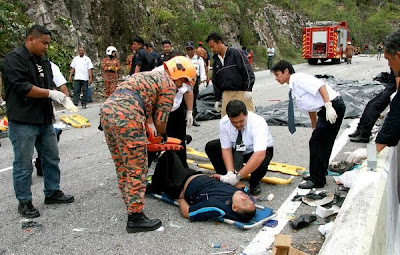 Zakaria said the bus was heading from Cameron Highlands to Kuala Lumpur because it was believed that the tourists were to have boarded a flight from the Malaysian capital to Bangkok. Preliminary investigation indicated that the driver lost control of the vehicle and it crashed onto the road divider, went across to the opposite lane and overturned into a ditch.

He said the police and Fire & Rescue Department were summoned at about noon and they deployed 100 personnel in the rescue operation. Zakaria said there were 37 people in the bus bearing registration number AFX 2266 belonging to San Express Holiday registered in Perak and operating out of Changloon, Kedah.

San Express Holiday managing director Sor Eng Hock, who is in Bangkok on business, said when contacted: "I am very sad ... I am shocked." He said he would have to come back to the country to find out what exactly happened. The bus company was registered in 2007 and its six buses had never been involved in major accidents, he said.Replying to a question, Sor said he would have to discuss some form of compensation for the victims. 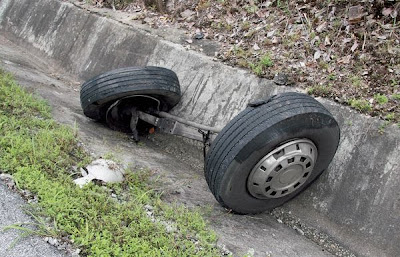 The Cameron Highlands-Simpang Pulai Road, which has many curves and gradients, was opened to traffic in 2003. It is an alternative road to the highlands, the original one leading from Tapah. The new road is usually used by motorists heading to Gua Musang through Lojing in Kelantan.

Today's accident is believed to be the worst in Malaysian history. The previous major road accident occurred on Aug 13, 2007, when 20 people were killed and nine injured in a bus accident at Km229 of the North-South Expressway in Bukit Gantang near Taiping, also in Perak.

Malaysian Research Institute on Road Safety (Miros) has been given the responsibility to identify the cause of the accident at Km15 Cameron Highlands-Simpang Pulai Road today, which was the worst bus tragedy in the country's history.