If Najib can pay Apco, can't he pay the teachers too.... 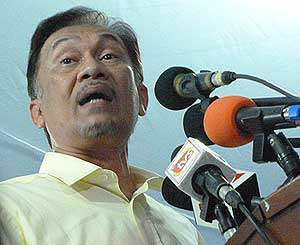 Pakatan Rakyat has defended its proposal to provide a RM500 special monthly allowance for those in the education service in an effort to reform the education sector. In a statement today, PKR de facto leader Anwar Ibrahim said the formula to achieve this was by simply doing away with the BN administration's excesses.

"For example, the cost for the prime minister's international trips so far (RM8.7 million) could have paid for the special allowance for 1,450 teachers.

"Payments of RM77 million made to Apco Worldwide for 2009 can pay for the special allowance for 12,800 teaching personnel, equivalent to the total workforce entrusted to train our teachers.

"The recently disclosed cost of setting up and running Pemandu, involving a sum of RM131 million (including RM66 million paid to consultants) could have paid for the entire personnel managing our education service in the Education Ministry," Anwar said.

"Therefore, it is not about affordability. It is about political will and Umno and BN's (lack of) priority to restore the quality of education in the country," he said.

Anwar was responding to Deputy Prime Minister and Education Minister Muhyiddin Yassin's claim that Pakatan's proposal would bankrupt the country.

'We know our numbers'

He said that Pakatan had carefully studied the financial impact of its proposal and took note that there are currently 537,211 positions in the education services. This includes personnel in the ministry (24,153), education policy development (4,059), teachers and school operations level staff (493,399) and teacher training staff (10,610). The exercise to provide the RM500 special monthly allowance would then cost RM3.2 billion per annum.

"This amount is relatively small when compared with the excesses of Umno and BN in managing taxpayers' money," he said.

Anwar argued that Umno and BN had never treated education as a priority, pointing to the lack of concrete proposals to improve the education sector over the past decade.

"Pakatan's special allowance proposal is the first step towards promoting the teaching profession as a career of choice, at par with other professions such as doctors, engineers and accountants," he said.

Anwar also chided Prime Minister Najib Abdul Razak for dragging his feet in the establishment of the special consultative body to resolve issues plaguing the teaching profession. He said this would not have come to fruition had Pakatan not made consistent pledges to reform the education sector.

"A competent government would not have managed the nation's education service in this manner. The responsibility to look after the welfare of the teachers is an inherent function of a government. "Thus, it should not wait for a cue from its political opponent before it decides to act for the betterment of the teachers," he said.

However, Anwar added, Pakatan was steadfast in its belief that the welfare of teachers was still central to efforts to improve the quality of education. "Therefore, the RM3.2 billion special allowance proposed will be a good investment for the country's future."

Pakatan's special allowance proposal were among a slew of promises for reforms that can be implemented within the first 100 days after capturing Putrajaya. The pledges were announced during the second Pakatan convention in Penang on Sunday.