Is Najib's gov't hiding behind palace.... 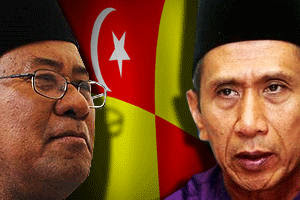 The Federal government is a "coward" for hiding behind the palace in the appointment of the new Selangor state secretary, the Seri Setia assemblyperson Nik Nazmi Nik Ahmad says.The appointment of former Selangor Islamic Religious Department (Jais) director Mohd Khusrin Munawi is bound to deepen the rift between the state and federal governments, Nik Nazmi said, calling the move "sabotage".

"It is only common sense and basic professionalism to appoint someone who can work with the government of the day. But here, the federal government has blatantly taken on someone with a clear record of going against the state government. "This is sabotage," said Nik Nazmi, who was a former political secretary to Menteri Besar Khalid Ibrahim.

"(Prime Minister) Najib (Abdul Razak) has only two objectives - winning the next general election and taking back Selangor because that is where the money is. In other words, I'd call him bacul (coward)," he said when contacted. With Khusrin's appointment to take effect on Jan 1, many in the Selangor government are calling it a clearcut effort to cripple the Pakatan Rakyat administration.

Khalid yet to meet Sultan

While chief secretary to the government Sidek Hassan has insisted that the approval of Sultan Sharafuddin Idris Shah of Selangor, has been obtained, it is understood that Khalid has been frantically attempting to seek an audience with the Sultan. Khalid traditionally has an audience with the Sultan every Wednesday morning, before holding the state executive council meeting.

However, several news reports have indicated that the Sultan is away on leave and will only be back in Selangor on Jan 3, three days after Khusrin is supposed to start work. Some of the news reports quoted the Sultan's private secretary, Mohamad Munir Bani, as saying that the appointment was final and could not be disputed. Munir also blamed the state government for being late in sending in its recommendations for the post.

It is understood that Khalid had sent in a list of three candidates - including local government heads and a senior state civil servant - all of whom have been interviewed by a special panel appointed by him. In the meantime, it is learnt that the MB will issue a press statement on the matter later today.

In defending his former boss, Nik Nazmi said the announcement of the appointment without the MB being informed earlier is considered as "going against protocol". "Is it right that the MB, the head of the government in which Khusrin will work as the top state civil servant, gets to know about the appointment only through the media?

"The state constitution requires the state secretary to take his oath of office in front of the MB, indicating that a free and respectful relationship is supposed to exist between the MB and the state secretary to smoothen the government machinery," he said. With Khusrin ranked at Jusa C, Nik Nazmi added, he was under-qualified for the post of the top civil servant in the state - a position that comes with a Jusa A ranking.

Although there is no written law requiring consultation with the Selangor menteri besar on the appointment of its new state secretary, convention dictates it should have been done. Lawyer Derek Fernandez said the consultative process with the menteri besar is standard practice, not the letter of the law, where it is a formality that should not be taken for granted.

“It is something which should be followed and not discarded in the best interests of Selangor. It would seem unfair if the menteri besar or his state exco members are not consulted,” said the Petaling Jaya-based lawyer.

Fernandez said in Selangor, the officer appointed as state secretary can come from federal level. However, it must work within the constitutional framework and constitutional law, which by convention dictates consultation among the Public Services Commission (PSC), the chief minister (the Selangor menteri besar) and the exco members of the state, he said.

“This is the problem when you have a two-party system, with different governments at the federal and state levels. So, despite there being a democratically-elected government, the government will not be able to effectively carry out its mandate without federal cooperation,” he said

“But the federal government has to respect the wishes of the Selangor people, who have elected their menteri besar and exco from Pakatan Rakyat. In a situation where there is a political divide between federal and state governments, the situation makes it difficult for the state to function,” he said.

“Therefore, it is most appropriate for the PSC to consult the menteri besar on the appointment. The civil servant will also have a problem in his allegiance on whether it would be to the state in which he works or the federal authority that pays his wages.”

The only problem here is that the Federal UMNO/BN government doesnt respect anyone....