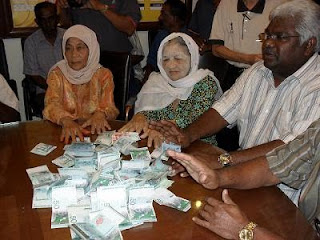 Senior citizen Habsah Saib, 81, said she made up her mind to return the money when she found out that the funds for Penang’s Senior Citizen Appreciation Programme came from gambling sources. “I can pay the money now when I am alive, but I will not be able to do so when I am dead. I don’t want this money,” she sobbed.

“They can be Malays, Indians or Chinese… nobody wants gambling money,” he said, adding it was time that Chief Minister Lim Guan Eng stopped “spinning lies”.

Now who is spinning lies Lim Guan Eng or UMNO ??

The government receives an average of RM2 billion yearly from the gambling industry, and the use of the money is not segregated nor restricted for use by certain groups only. The Finance ministry reveals this in a written answer to Rantau Panjang member of parliament Siti Zailah Mohd Yusuff. It said in the first nine months this year, the government collected RM1.95 billion from the gambling sector. The revenue also had increased since the year 2003, from RM1.79 billion to RM2.6 billion in 2009.

The latest revelation not only confirms that the government does not distiguish between money considered "haram" from the "halal", but also falls flat on accusation by UMNO and its right-wing offshoot Perkasa that the Penang state government has been funding welfare activities from gambling money.

Penang's chief minister Lim Guan Eng recently became target of attacks by the two organisations, who called on Muslims in the state to return the cash from the state's financial aid programme for poor Penangites, citing its haram origins.

DAP's Kuching MP Chong Chieng Jen urged the government to walk the talk by setting up a special fund to store taxes sourced from gambling avenues.

“Since UMNO in Penang has been accusing the state government of using gambling revenue to fund its old age appreciation fund and has been pressuring Muslims to return the money since it was non-halal, I think the federal government should walk the talk and set aside a special account to store all taxes earned from 4D companies.

“If UMNO truly holds on to the belief that tax revenue from the gambling industry should not be used to pay charity to Muslims, then they should do this,” he was quoted as telling news portal, The Malaysian Insider, in response to the Finance ministry's earlier admission that it received RM1.08 billion in gambling revenue specifically from 4D gaming outlets.

UMNO will lie and forever lie to stay in power.