Adverse media coverage of the PKR internal crisis, which took place during the party polls, have dealt a severe blow to public confidence in the party and de facto leader Anwar Ibrahim, a Universiti Malaya survey found.

According to the survey which was conducted in Kuala Lumpur and Selangor, 52 percent of the 1124 respondents said that the internal conflict led to a loss of confidence in Anwar's leadership, while 49 percent felt let down by the party.

Following this trend, a significant 43 percent said that this would affect their decision whether or not to vote PKR in the next general election. The respondents surveyed by the UM Centre of Democracy and Election Studies (Umcedel) in November, included those from constituencies currently held by PKR, including Ampang, Bandar Tun Razak and Lembah Pantai.

Of the respondents 37.8 percent said that they had received information about the PKR polls from mainstream print and broadcast media. Only 11.6 percent relied on the Internet or alternative news alone, while 16.8 percent received information from mainstream and alternative media, while 24 percent depended on all those avenues plus word of mouth from friends and family. 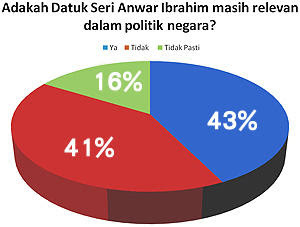 While 41 percent believe that Anwar is no longer relevant in Malaysian politics, a significant 43 percent are still pinning their hopes on him, while 16 percent were unsure, showing that opinions are still somewhat split down the middle.

"When shown the survey results, Anwar said that this was not unexpected, claiming that it is proof that the smear campaign against him and PKR was unsuccessful," the survey report read. The same trend of fence-sitters persists with 19 percent of respondents uncertain if the crisis has affected their confidence in Anwar's leadership.

Interestingly, 21 percent of respondents remain undecided about whether the internal crisis would affect their voting in the next general election.

"There is still wide scope for PKR (to gain loss ground) as those who have rejected the party as a result of the crisis have yet to reach a more convincing percentage of more than 50 percent, while the proportion of fence-sitters is still high," the survey said.

Responding to Twitter followers, one of whom reminded Anwar that PKR should be as stable as its partners PAS and DAP, Anwar replied that it was on top of list.

“Yes, it will be our main priority,Anwar said the party would take the findings as a challenge to work "harder, smarter" to regain voters’ confidence.

A wake call and time to act not ont only for Anwar but the PKR members in general....