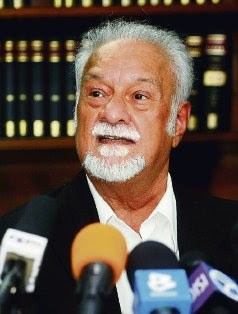 Nazri had also called the opposition bench “stupid” and “crazy” with “cow dung in their heads” for threatening to sue Pandikar, and described Karpal as a “third-class lawyer”. To that, Karpal said: “Nazri can call me a third-class lawyer. I may be third-class but he has no class.

Karpal Singh said today Pakatan Rakyat will take Dewan Rakyat speaker Pandikar Amin Mulia to court over the suspension of four opposition MPs from Parliament. Saying that the coalition will file its suit “as soon as possible”, he also rubbished Minister in the Prime Minister's Department and de facto law minister Mohamed Nazri Abdul Aziz's remarks that decisions of the Dewan Rakyat cannot be challenged in court.

“But in the case of (Puchong MP) Gobind Singh Deo, we took the speaker to court and we won,” said Karpal, referring to Gobind's six-month suspension without pay, where the court ruled that the withholding of an MP's salary was unconstitutional.

“The (Perak constitutional crisis) showed that even the state assembly proceedings can be questioned. “Action against the speaker will be filed soon and I am surprised that Nazri said it cannot be challenged when there is already a precedence,” he added as the Pakatan MPs present broke out in laughter.

“This matter will go to court and we are serious about it,” he said at a press conference called by Pakatan at the PKR headquarters in Petaling Jaya this morning.