Decapitate or remove Anwar by all means..... 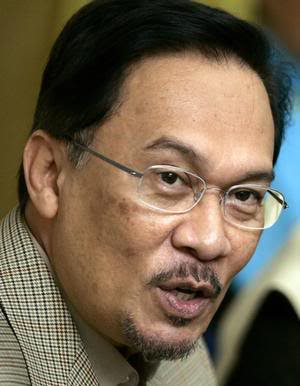 You need not advert to Dr Wan Azizah Wan Ismail's reference to her husband as "God's gift" to the reformasi movement to know if that's true - its capacity to send Zaid Ibrahim and company ballistic notwithstanding.

You have merely to see what punitive measures the powers-that-be have next in mind for Anwar Ibrahim to know of that description's moorings in reality.

It looks like the powerful rights and privileges committee is on course to refer Anwar's indictment last March for misleading Parliament on the Apco issue to a vote in the House without his defense being called.

What with the prosecution in Sodomy II, with the acquiescence of the judge, doing all it can to deny Anwar elementary norms of due process, this anticipated action by Parliament's rights committee only reinforces what now passes for conventional wisdom: The powers-that-be hold that the decapitation of Anwar means the decapitation of the reformasi movement.

Though Anwar's travails were the principal contribution to the genesis of the reformasi movement, it is folly to leap from that fragmentary fact – that his privations are its fuel – to an arbitrary conclusion – that his removal or incarceration means the movement's evisceration.

He's not the sole agent for change

Though Anwar has been the principal herald of political change in Malaysia since his days as Abim leader from the early 1970s, he has not been its sole agent. Otherwise the movement for change would not have survived his induction into the government of Dr Mahathir Mohamad, 13 months after Anwar reached a creative apotheosis of sorts in March 1981 by his leadership of the broad-based movement against repressive amendments to the Societies Act.

The movement for change kept subsisting through his 16 years in the Umno-BN government and was energised anew when he was sacked, traduced and jailed by Mahathir in 1998-99. So though he is essential to the success of the movement for political change – he's its vitalising agent – he is not its sole sustenance. Otherwise the movement for change would have withered and waned during the time of his Umno-BN induction. But today the powers-that-be have pressed on to a conclusion: Decapitate or remove Anwar and you smother the reformasi movement.

It is said those whom the gods would destroy they first make mad with self-righteousness and unquestioning self-esteem. The powers-that-be are writing their obituaries even as they press on by dint of faulty premises to their false conclusions. - Terence Netto