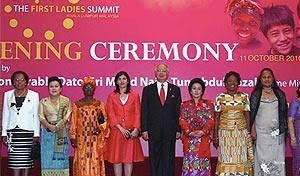 The recent First Ladies Summit came with a price tag of close to RM4.5 million at the government's expense.The brainchild of the prime minister's wife, Rosmah Mansor, the inaugural summit hosted 15 wives of heads of state from around the world - although mainly from African countries - in Kuala Lumpur in October.

In a written reply to the Dewan Negara today, Women, Family and Community Development Minister Shahrizat Abdul Jalil revealed that the total expenditure for the three-day summit came up to RM4,498,949.99.

In response, PKR senator Syed Husin Ali baulked at the figures, claiming that Rosmah is not even the nation's rightful First Lady.

“Why is the First Ladies Summit organised by our prime minister's wife when, in our country, the First Lady is the Permaisuri Agong?

“This brings into question the basis of giving RM4.5 million to the PM's wife to organise this meet while no role was given to the Permaisuri Agong,” he told a press conference at the Parliament lobby this morning. The summit, themed 'A Child Today, A Leader Tomorrow', was aimed at highlighting the need to nurture children who will be future leaders.

During the press conference, Senator Mumtaz Md Nawi from PAS questioned the involvement of the Permata Negara programme - another of Rosmah's initiatives - with different government agencies. “We appreciate the concern of anyone in looking after the welfare of children.

"But in a parliamentary democracy, there have to be boundaries in the programmes involving the Women, Family and Community Development, Education, Higher Education, Youth and Sports Ministries and the Prime Minister's Department," said Mumtaz.

“This is especially since there has been an announcement that the Permata Negara programme would involve teenagers. “To what end is the power of the Prime Minister's Department or the prime minister's wife being used in outlining a national policy?” 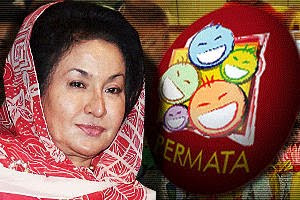 Rosmah had said in June that the Education Ministry would be taking over the programme from 2012 when two relevant laws are amended. Permata - which started out as an early childhood learning programme - has also been allocated RM111 million in the 2011 Budget.

'Najib spent half his time overseas'

Meanwhile, Syed Husin noted that premier Najib Abdul Razak has spent more than half of his time in power overseas. Revealing the written reply to him by Minister in Prime Minister's Department Mohamed Nazri Abdul Aziz, Syed Husin said that Najib had spent RM8,724,895.91 on his 42 trips abroad over the span of one-and-a-half years.

In the 588 days between April 3, 2009 and Nov 19 this year, Najib had also spent 274 days abroad. “Why is he spending so much time overseas when there are a lot of problems in the country, especially at the expense of the taxpayers?" asked Syed Husin.

“I want to know what are the benefit and returns of spending so much time and money on travelling so often.”