Ultimatum by Gobala but Anwar not involved with temple 'closure'... 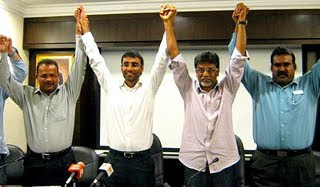 Padang Serai MP N Gobalakrishnan is continuing his tirade against PKR de facto leader Anwar Ibrahim, and this time has challenged him to reopen a Hindu temple in Selangor. The fiery first-term MP issued an ultimatum to Anwar to reopen the Sivan temple on Bukit Gasing, Petaling Jaya, after claiming that Anwar was the one who personally instructed that the temple be closed down.

The ethnic Indian PKR leaders have rallied behind party de facto leader Anwar Ibrahim over allegations of his involvement with the closure of the Sivan temple in Petaling Jaya. Newly-minted party vice-president N Surendran said that the decision to close the temple was made by the Petaling Jaya City Council and Anwar had no involvement whatsoever. “It is ridiculous that a national leader of a party would be involved in a local council decision,” said Surendran during a press conference at the party headquarters today.

He added that the accusers, who include former party supreme council member and Padang Serai MP N Gobalakrishnan, were making “malicious” and “ridiculous” accusations. The Sivan temple situated on top of Bukit Gasing in Petaling Jaya has been the main topic in Gobalakrishnan's recent grouses against the party leadership, even going as far as to saying that Anwar was “anti-Hindu” for allegedly closing the temple. 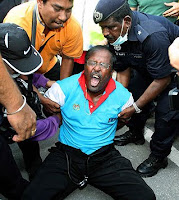 Temple being renovated, not closed

Former supreme council member S Manikavasagam also rubbished Gobalakrishnan's allegations, adding that he was deeply disappointed with the latter for making unfounded claims. “If Anwar really did close the Sivan temple down, I'll be the first to make noise. You know me, I'm a noisemaker.

“But the person making these allegations should also know the full story behind the temple,” said Manikavasagam, who is also the Kapar MP.

Explaning the situation, Selangor exco in charge of non-Muslim houses of worship Dr Xavier Jayakumar denied that the temple is completely closed off. “Yes, it is closed to the public only because physical construction work is still going on,” said Xavier, who is a former party vice-president.

He explained that renovations on the temple started in 2006, where the temple's board of trustees - which included former MIC president S Samy Vellu's wife, Indrani - had wanted to expand the tiny temple into the largest Sivan temple in the country, that could cater to 100,000 devotees. 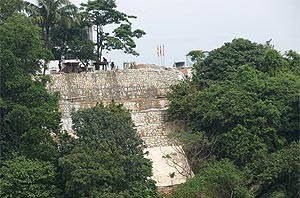 Since then, the board of trustees had poured RM1.4 million into fortification work of the slope and soil, lifting the stop-work order just a month after it was issued.

“Since then, construction is still going on in the temple. Of course we have to close it to the public and devotees because it is still not safe. But work is still progressing to this date,” he said.

“And I want to stress that at no time that Anwar is involved in the decision-making of this temple. The meetings has always been between the temple board of trustees, me and the local council,” he said.

Gobalakrishnan had previously zeroed in on Anwar, together with Subang MP and Dr Xavier as being instrumental in “closing” down the temple, before issuing an ultimatum to them to re-open the temple within a week from today.

this dog doing the barking for najis...

will be the first to defect.

this dog should be chase out from pkr.