Anwar keeps bouncing back, to the chagrin of his enemies... 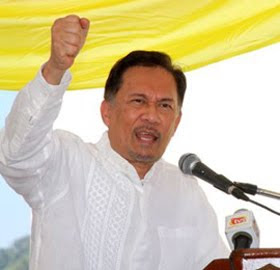 With all that he has had go through in recent months—not to speak of recent years—one would have thought that Anwar Ibrahim would be a goner by now.

But the charismatic politician and orator keeps bouncing back, to the chagrin of his enemies, who were probably hoping that he would not survive the turmoil of the PKR national elections, the setbacks he has suffered in his sodomy trial (including the apparent support of Singapore leader Lee Kwan Yew for the indictment) and his suspension from Parliament.

At two recent ceramahs in Negeri Sembilan and Malacca, his audiences received him as enthusiastically as they always have. During the PKR elections, which ended last month, both Zaid Ibrahim and S Jenapala attacked him relentlessly over alleged discrepancies in the conduct of the polls. They even seemed to have widespread support from within the party. And there were co-stars who questioned the legitimacy of his position as PKR’s Ketua Umum.

Many opposition supporters and even leaders from PAS and DAP feared that the bad press Anwar was getting would affect Pakatan Rakyat’s performance in the next general election. Even top PKR leaders felt they had a tough time explaining Anwar’s side of the story to the PKR grassroots, what with the mainstream media maximally exploiting the apparent disarray in the party.

According to at least one Malay daily, Anwar had lost the confidence of a substantial section of the PKR membership. These detractors should have been in Seremban last Thursday night, where Anwar delivered his first public address since his suspension from Parliament. They would have seen proof that he still commands incredibly strong support and respect from the grassroots. 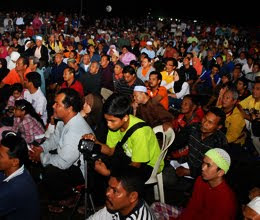 Pundits who observed the size of the crowd and its reaction to the speech maintained that no other Malaysian politician had the ability to cast such a spell on such a racially mixed audience.

About 5,000 people—Malays, Chinese and Indians—stood shoulder to shoulder on a small field in the Seremban suburb of Kampung Ismail. The number was remarkable, considering the last-minute confirmation of the event, the lack of publicity for it and the heavy downpour that preceded it and turned the field muddy and sticky. The reception surprised even the Negeri Sembilan PKR officials who organised the talk.

The crowd not only listened, but roared in approval or anger at the appropriate moments in Anwar’s speech. He spoke for about 90 minutes, mostly on the sodomy allegations and the suspension from Parliament of himself as MP for Permatang Pauh, Karpal Singh (DAP-Bukit Gelugor), Azmin Ali (PKR-Subang) and R Sivarasa (PKR-Subang.)

Referring to the WikiLeaks report that quoted Singapore’s Lee as saying he “knowingly walked” into a sodomy trap and blasting former premier Dr Mahathir Mohamad for his subsequent comments, Anwar said:

"I challenge Kuan Yew and Mahathir to give evidence in court.”

The same WikiLeaks report also made damaging statements about Prime Minister Najib Tun Razak. Anwar challenged Najib to defend himself, as he was doing in court and in public forums.

Anwar was supposed to speak only for an hour and should have left the stage at 10pm, as he was expected at another ceramah at Ayer Molek, Malacca. But encouraged by the crowd, he spoke on, ignoring two time reminders that a state PKR leader put on the rostrum.

He ended the speech at 10.30pm, after reminding Pakatan leaders and supporters to capture Negeri Sembilan in the next general election. The opposition needs only four more seats to form a government in the state.

Anwar arrived at Ayer Molek at 11.30pm, where only a slightly smaller audience had been waiting for hours to hear him. Again, he wowed the crowd.