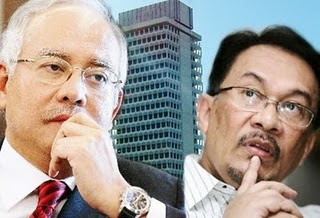 Najib Abdul Razak's attacks on Anwar Ibrahim and Pakatan Rakyat yesterday smack of 'a desperate bid to restore his image' among voters.Responding to the scathing remarks made during the BN convention, Anwar also said such conduct is unbecoming of Najib, who is the prime minister.

“I think Najib is desperate. These are signs of an impending general election (and he feels the need to get) voters' support,” Anwar said this morning after his sodomy trial was adjourned. “(He) sounded very desperate and angry. Certainly this (outburst) is not prime-ministerial material.”

Najib had accused PKR of nepotism, as Anwar is de facto leader, his wife is president and their daughter is a vice-president. He took a similar swipe at DAP for being a 'son and father party', in which Lim Guan Eng (left) holds more power than the chairperson. Najib also told some 2,300 cheering delegates that the general election would be held “soon” and that BN would not be unseated in Putrajaya. "We will rule for another 50 years. We have to work hard. We have to achieve bigger success. We cannot be complacent,” he said.

DAP's Lim Kit Siang also weighed in on the subject, in a statement today. He said Najib's description of Pakatan as “anti-national”, “evil” and “despicable” will come back to haunt the prime minister and BN. Lim said that, although Najib had warned against the 'four political diseases' that would hamper BN in defending Putrajaya, the prime minister himself is guilty of some of these.

“Najib is guilty of being delusion(al) when he spoke of BN's aim of bringing Malaysia to its 'fullest potential', when Malaysia had been losing out to one country after another in economic development and progress for the past five decades,” said Lim.

“Najib also has not been able to check on the brain drain and domestic capital outflow to the extent that the country was warned recently by a cabinet minister (Idris Jala) that Malaysia is heading towards bankruptcy in 2019.” Lim also said Najib also suffers from amnesia as he has forgotten the reasons why BN sustained its worst electoral defeat in the 2008 general election, losing five state governments and also its two-thirds majority in Parliament.

“As the prime minister Najib should be a leader for all Malaysians if his 1Malaysia concept is to be taken seriously. He should be mindful of Dr Samuel Johnson's dictum that 'Patriotism is the last refuge of scoundrels' and should not set the bad example of doubting the sincerity ... of the patriotism of his political adversaries.

“If Najib is serious about his charges against Pakatan, let's have a series of televised debates between BN and Pakatan leaders on who is really 'anti-national', 'evil', 'despicable', 'very dangerous'.”- Hafiz Yatim

As for the debate, Najib got to consult Bik Mama first....

Read "Evil" Pakatan tells Najib: Those who live in glass houses should not throw stones' here.